In September 2020 Democrat Hillsborough County Supervisor of Elections (SOE) Craig Latimer took over $2.9M of "ZuckBucks". He received his "ZuckBucks" from the highly partisan Democrat activist nonprofit CTCL. There are a lot of questions that deserve answers from SOE Latimer.

In 2020 CTCL told local election officials to report to the Censor King Tech Oligarchs ala Zuckerberg "suspicious" posts "they" considered misinformation and/or disinformation. Who knew the role of the SOE included being the social media police? Who was colluding with who?

As we posted here, CTCL was founded in 2012 by Tiana Epps-Johnson, a former election administration director for the New Organizing Institute (NOI). NOI, a 501(c)(4) nonprofit was a partisan Progressive activist organization that trained Progressive organizers and was responsible for training many of the Democratic Party's digital organizers. NOI was called "the left's think tank for campaign know-how" by the Washington Post. 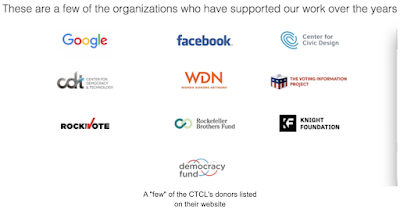 In addition, according to CTCL's previous 990's, the Tides Foundation also funds CTCL. The Tides Foundation is a Leftist organization funded by the radical Leftist billionaire George Soros. Soros has openly admitted that he is a "transactional meddler" who uses nonprofits to meddle in elections.
Did Zuckerberg become the George Soros like "transactional meddler" who meddled in our 2020 election using nonprofits?
Zuckerberg handed almost a HALF BILLION dollars to 2 nonprofits - $350 Million to CTCL and another $70 Million to the nonprofit - Center for Election Innovation and Research (CEIR) who also handed out "grants".
CEIR also funneled millions to Democrat aligned nonprofits. According to this Breitbart article CEIR "gave $12 million in September 2020 to a Michigan nonprofit, which then funneled the money to two Democrat consulting firms...". Those firms targeted specific groups of voters and "somehow" were being notified to remove voters from their targeted messaging once they voted.
As posted here, Latimer was the most flagrant user of "ZuckBucks" of any Florida county who received them. Very little was spent on COVID resources, none was spent on any new equipment. Latimer handed $2.6M (90%) of the $2.9M ZuckBucks he received to a local PR firm Vistra Communications.
Outsider PR firm Vistra spent the entire $2.6M on what can be described as an unethical, perhaps even illegal, SOE GOTV campaign.
Craig Latimer has been working with the highly partisan Democrat aligned CTCL nonprofit for years. Latimer was elected Hillsborough County SOE in 2012 and he has had a relationship with CTCL since at least 2014.
Such relationship is a huge red flag.
Latimer knows exactly who CTCL is - a highly partisan Democrat-aligned organization.
Latimer and his Director of Communications Gerri Kramer, joined CTCL's youtube videos as participants in working with CTCL to create a new CTCL "Civic Engagement Toolkit". Why is the Democrat Hillsborough SOE working with a Democrat partisan nonprofit to develop any kind of "toolkit"?
Latimer's relationship with CTCL was under the radar of voters in Hillsborough County.
In April 2020, CTCL stated their 2020 election strategy priority was to push mail ballots. Mark Zuckerberg knew that. Zuckerberg's money pushed mail ballots, changes to election laws and rules that never went thru a legislative process and some very questionable activities documented in numerous states.
Florida Politics published a post on September 2, 2020 about the potential use of "ZuckBucks" in Florida elections. Gerri Kramer, Latimer's Director of Communications, is quoted:

“That’s really a county by county question,” said Gerri Kramer, spokesperson for the office. “Since it’s a grant process, any county can apply for the money, if needed.” That won’t happen in Hillsborough. “We’re good,” she said.

One day later on September 22, 2020, Latimer awarded a no-bid contract to local Marketing and PR firm Vistra Communications for $2.6M - almost 90% of the total "ZuckBucks" Latimer received. Vistra's contract even requested expedited payments from the SOE due to the large costs being spent in such a short period of time.

Vistra rapidly spent the entire $2.6M in the 5-6 weeks prior to the November election on a GOTV campaign to push mail ballots and target young, minority and "inactive" voters. Vistra's contract with Latimer even used the "Woke" term "LatinX" voters they were targeting.

The role of the Supervisor of Elections (SOE) is ADMINISTRATIVE. Their role is to administer the local elections and voter registration process. The SOE is not a Public Relations or Marketing role to be used to unfairly chase specific demographics of voters. It is not the role of the SOE to chase after voters who have never voted or inactive voters.

Hillsborough SOE clearly stated September 2, 2020 they had enough funds to ADMINISTER the November election. So what changed 9 days later for the SOE to pursue almost $3M in "ZuckBucks" and spend almost all of it on a GOTV campaign?

Did Latimer see the "ZuckBucks" as a way to launch a GOTV campaign thru a third party PR firm? Latimer, selected as President of the Florida Supervisors of Elections Association in May 2020, knew he could never launch such GOTV campaign and oh so quickly with taxpayer dollars.

Latimer and Kramer have had a relationship with CTCL for years. What communication was going on between the SOE and CTCL?

Did CTCL contact Latimer and/or Gerri Kramer directly to pursue the grant? If Latimer knew they would get the grant they asked for, were they already orchestrating the GOTV contract with Vistra?

Latimer and/or Gerri Kramer never transparently informed the voting public about their $2.9M "ZuckBucks" grant. Hillsborough SOE never published a press release to announce the grant millions they were receiving.

For election integrity purposes, receiving a grant of almost $3M - almost 20% of Latimer's budget for 2020 - from a private donor is certainly newsworthy.

Why didn't the Hillsborough SOE inform the voting public what changed in 9 days to pursue almost $3M in "ZuckBucks" from a Democrat aligned nonprofit?

Latimer provided none of the transparency required to spend tax dollars - public hearings, financial transparency, checks and balances, accountability - because he was spending outsiders "private" money....on our election activities.

Can Hillsborough voters feel "trust" and "confidence" with such disregard and lack of transparency?

We could find no local news reporting about Hillsborough SOE's "ZuckBucks" grant or how that money was spent. Why?

The New York Times reported about the "ZuckBucks" in September 2020:

The prospect of election administrators tapping large pools of private money has raised new legal and political questions. That is partly because it is unusual for elections to be subsidized by nongovernment funding at this level, but also because most of the cash is coming from nonprofit groups that have liberal ties, and the biggest source of the cash, Mr. Zuckerberg, has drawn fire from across the political spectrum.

The cash comes with a new set of questions about donor transparency, motivations and the influence of groups and figures that are not democratically accountable.” He also reported without objection that conservatives were concerned because of “the Democratic origins of CTCL and that its donations have predominantly been in areas where Democrats depend on votes.” [AP reporter] Nicholas Riccardi stated “I cannot believe people of such partisanship will put their partisanship aside while taking hundreds of millions of dollars and distributing it to election offices.”

But not a peep from our local media when Hillsborough SOE took the questionable "ZuckBucks" money.

Regarding Latimer's contract with Vistra, we received in writing via a public records request to the SOE: "There was no RFP. The Vistra contract was made through emails and verbal conversations."

Handing $2.6M with zero transparency to a third party PR firm to fund a GOTV campaign is a problem.

How did Vistra get awarded the contract the day after the SOE received their "ZuckBucks" grant? Why was Vistra selected?

What communication and coordination was already occurring between Latimer and Vistra to enable a contract, apparently already created, to be signed so quickly?

What if a conservative organization such as the NRA, Heritage or Right to Life, etc. handed election officials almost a half billion dollars to fund election activities targeting specific voters? We can bet Democrats, the Tampa Bay Times and all of DNC Media would be screaming outrage. Their outrage would be headline news everyday most probably demanding the SOE must resign.

Lack of reporting by local media is a real injustice because it displays journalistic laziness, incompetence and/or the censoring of important information from voters.

The only mention we could find by the Tampa Bay Times about "ZuckBucks" was this article published on August 8, 2021 - almost a year after the 2020 election. Their article makes generic claims that election offices are "chronically" underfunded and quotes a person from the highly partisan CTCL, not any elections official, that the "infrastructure faced unprecedented challenges" due to the pandemic.

The Times never mentions a word about any of the "ZuckBucks" handed out in Florida, including to their own local Hillsborough SOE who took $2.9M "ZuckBucks".

Well...Latimer spent his "ZuckBucks" with a sole-sourced PR firm on a GOTV campaign, not on elections "infrastructure". And...Gerri Kramer had already publicly stated Hillsborough did not need any additional funds to administer the 2020 election.

The 2022 election year is bearing down upon us. Thankfully private funding of election activities is now banned in Florida.

But voters deserve transparency from Latimer about his $2.9M "ZuckBucks". Voters deserve to know whether Latimer is still associated with CTCL.

Voters must trust their election officials to treat EVERYONE the same and fairly and that they do not step outside the bounds of their administrative role.

Whitney Quesenbery is on CTCL's Advisory Committee that CTCL claims is "made up of some of the most experienced, thoughtful election professionals in the United States." Quesenbery Tweeted this on November 6, 2020. How "thoughtful". 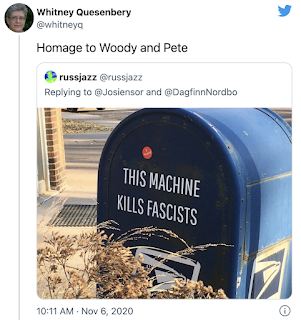 Latimer must immediately cut off his relationship with the highly Democrat partisan CTCL.

It's time to get all the who, what, where, why and how questions answered by Latimer about his "ZuckBucks" issue.

The State of Florida needs to launch a formal investigation and audit of the Hillsborough County SOE's $2.9M "ZuckBucks", the $2.6M GOTV campaign it funded and Latimer's relationship with CTCL.

Voters deserve transparency and accountability from their SOE.

Voters must be assured that Latimer has cut all ties to the highly partisan CTCL.

Because voters must have trust in the integrity of ALL actions taken by their SOE.