Hold On To Your Wallets Hillsborough County! AFT Rail Tax Charade 2.0 is On Its Way 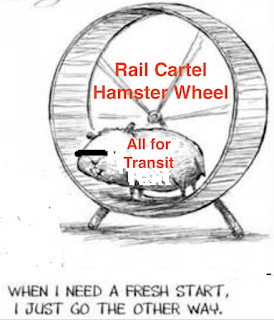 Hold onto your Wallets! The Tampa Bay rail cartel are at it again.

The Tampa Centric Five Democrats have the votes to put AFT 2.0, another 30 year, 1%, $16B (probably $18B now) rail tax on the ballot in November. Democrat commissioner Pat Kemp told us this last September. Having the votes is all they care about - silly little things such as refunding the illegally taken $521 MILLION AFT funds and getting real public input don't matter.

It's a done deal. The Vinik bailed out Tampa Bay Times confirmed what we already knew:

The county scheduled a series of community meetings beginning next month in anticipation of a proposed sales tax referendum on the November ballot.

The Town Hall meetings charade the commissioners planned to have last year have been rescheduled. As we noted before, the commissioners ignore the fastest growing area in Hillsborough, South County, where they scheduled NO meetings.

It looks like the County renamed these meetings to "Open Houses" because they are NOT Town Hall meetings where those who attend get to publicly speak.

These meetings are to sell the public that the County has no money to fund transportation in the County. That is a lie and we've seen that rodeo before.

Remember the scandalous and crony 2016 Go Hillsborough rail tax hike debacle? They County used the same lies back then, taxpayers fought back and that tax hike never made the ballot.

The scheduling of these "Open Houses" are on the agenda of tomorrow's county commission meeting. As we posted previously posted:

The upcoming Town Hall meetings are a charade just like the 2016 scandal ridden Go Hillsborough debacle. These meetings do not provide opportunities for citizens to make public comment. Just like the Go Hillsborough charade, citizens can look at storyboards (made up by county staff) at various "information stations", talk with county staff, identify areas of concern on a map and then only provide WRITTEN comments.

Like Go Hillsborough, citizens can only speak with County staff and the elected county commissioners do not participate in the meetings. That is a big red flag just like not allowing for public comment.

Another red flag from the agenda item about the Open Houses. They will

"NOT include SPECIFIC transit plans that HART may have. nor are the transportation needs of the County's municipalities included in the storyboards. If the Board desires to include those items it may take additional time for HART and the municipalities to prepare their presentation materials. One option would be for the first four County meetings to be held in districts as originally contemplated, then continue with additional meetings in each municipality; HART also would have opportunities to hold one or more public meeting on their plans.

How absurd! HART has a 10 year Transportation Development Plan that gets updated every year. Both HART and the municipalities submitted plans in 2019 about how they were going to spend the now illegal AFT tax.

These entities were salivating in 2019 over how to spend the now unlawful $16B AFT tax. They have known about these upcoming County meetings since last August...but they have no plans???

Commissioner Gwen Myers, who was a spokesperson for the illegal AFT tax in 2018  wants the same funding formula the AFT cronies made up behind closed doors. That would insanely hand over $7 BILLION to HART, a transit agency with all kinds of baggage and very low ridership.

Who sits on the transit agency HART Board? Tyler Hudson, Chair of the AFT PAC, Rena Frazier, 2018 AFT spokesperson, four of the Tampa Centric 5 commissioner AFT supporters - Kemp, Overman, Smith and Myers and big AFT supporter Jane Castor. These are the same people who rammed an illegal rail tax onto the ballot in 2018 and lied to the voting public about their $16B spending plan that funded rail but not new roads.

The AFT insane spending plan also hands over $160 MILLION to the "Central Planners" at the Hillsborough Transportation Planning Organization (TPO).

The Hillsborough TPO has failed Hillsborough County for years pushing costly transit over fixing our roads. TPO staff unethically pushed the 2018 illegal AFT rail tax and are enabling those who want to tear down 10 miles of I-275 that hundreds of thousands of residents, commuters, tourists, businesses, etc. use everyday.

Hillsborough TPO added a School Board member to their Board but then refused to plan for road improvements for all the planned new schools in Hillsborough County. This is total incompetence.

Taxpayers do not want to hand more than $160 MILLION to this failed, incompetent agency who keeps pursuing rail boondoggles and ignoring our roads.

High gas prices, raging inflation and exploding housing and food costs are tugging at everyone's wallets. Pushing higher sales taxes is appalling. Higher sales taxes are a commercial lease tax burden on businesses who are struggling with increased costs of doing business or still struggling from the pandemic.

County revenues are rapidly increasing due to growth and fast rising property values. The County has enough funding sources to fund its roads and transportation NEEDS.

The County has a SPENDING problem not a REVENUE problem.

Hillsborough County has wasted the last 14 years holding our roads hostage for a crony rail tax that is also tied to a new taxpayer funded baseball stadium. 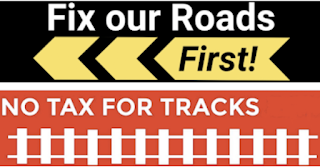 And remember four of the Tampa Centric 5 - Overman, Smith, Cohen and Myers -  are up for re-election in November. 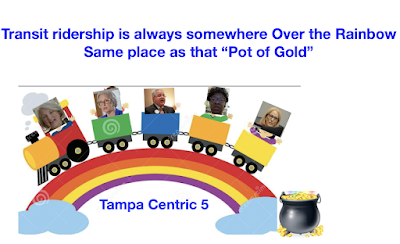 Posted by Sharon Calvert at 6:07 PM