As they ironically expressed their concerns about "rapid growth" in Tampa Bay, they voted to ELIMINATE FDOT's plan to improve and add capacity to 10 miles of I-275 from downtown to Bearss Avenue.

The Tampa Centric Democrats and their fellow Democrat Tampa city council members on the TPO exploited the pandemic to ram their vote through a public hearing in June that only 13 people attended to make public comment.

The reason the Democrats voted to REMOVE this project from the 5 year (Oct 2021-Sept 2026) TIP is because they want to totally REMOVE I-275 from downtown to Bearss Avenue. They want to tear down 10 miles of I-275 that a couple hundred thousand people use everyday and replace it with a street level accident prone congestion causing costly rail....that few will ride.

Those 10 miles of I-275 are used by residents of Hillsborough and neighboring counties, by tourists to get to Busch Gardens and the beaches of Pinellas County, by cancer patients going to Moffitt, by veterans going to the VA, by students going to USF and so many more. The Democrats don't care. They prefer to forcing people in vehicles to use a toll road and/or go out of the way to use I-75 and I-4 instead of the 10 miles of I-275 that they already paid for and have been maintaining for decades.

The Tampa Centric Five Democrats don't care. They are part of the Tampa Bay anti-car brigade who want to tear down I-275 north of downtown for a street level rail. They've already decided to put another rail tax boondoggle on the 2022 ballot - because they have the votes. Silly little details such as engaging the public and refunding the massive $522 MILLION unlawfully collected All for Transportation rail tax first don't matter.

Instead of improving our roads and interstates, the Tampa Centric Five want costly, outdated rail/transit the pandemic has almost rendered irrelevant. Tampa Centric Five Kimberly Overman made the following motion in June that passed:

To direct the MPO (TPO) staff to coordinate with FDOT and other local stakeholder agencies to develop cost estimates and approximate timeline for implementing a passenger rail service along the CSX lines in our region and to identify eligibility requirements for federal and State financial participation; further, staff would also identify possible roles and responsibilities of each of the pertinent agencies in this effort

Costly rail transit does not decrease traffic congestion. It forces taxpayers to pay for rail they will never use. The Tampa Centric Five commissioners want taxpayers in unincorporated Hillsborough to pay for costly rail in the city of Tampa...that is tied to a new baseball stadium and benefits wealthy downtown cronies.

SunRail SunFail, that uses street level CSX lines in Central Florida, is a fiscal disaster that has been draining all taxpayers in the State of Florida for over a decade. SunFail noise complaints have been pervasive and millions of additional tax dollars never planned for have been spent trying to abate the issue. Street level SunFail may be the most accident rail system in the country.

The State was obligated to turn over all fiscal responsibility for SunFail to Orange, Seminole, Volusia, Osceola Counties and the city of Orlando last year. That did not occur and these governing entities still do not have a long term funding source they promised FDOT in 2014 they would have in place by 2021. All taxpayers in Florida were lied to about the CSX SunFail fiscal disaster.

Street level trains cause congestion and there are a lot of street level train crossings on the CSX lines. Streets crossing the train tracks will cause traffic backups all over Tampa. Traffic is like water, it will seep elsewhere. With technology and GPS, those in vehicles will find alternative routes probably going through neighborhood streets not meant for heavy traffic to avoid the train crossings.

The pandemic has devastated transit ridership that was an anemic 2% in Tampa Bay before the pandemic. Local transit expert Steve Polzin stated last year:

COVID-19 has produced changes in the behavior of individuals, businesses, and governments.

Public transportation is among those sectors disrupted by COVID-19 and unlikely to return to pre-COVID-19 conditions.

We could find no report about the Tampa Centric Five and Democrats vote to remove the I-275 downtown to Bearss Avenue widening until this Times article appeared on October 21, 2021 that mentioned it at the very very bottom.

The Tampa Centric Five critics of interstate widening have aligned themselves with the Sunshine Citizens transit ideologues. Overman helped found StopTBX who kept moving their demand goalposts on their I-275 widening opposition. Even as FDOT downsized their original plans for I-275 north of downtown to adding a lane of additional capacity each way WITHIN the property footprint FDOT already owns, StopTBX demanded all widening STOP.

StopTBX then morphed into the Sunshine Citizens transit activists group who want to force people out of their cars. Michelle Cookson, a leader of Sunshine Citizens, took to Facebook demanding highway expansion stop so that more traffic congestion is created and make it painful for car travel. 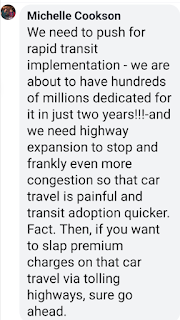 Obviously, the three countywide Tampa Centric 5 Democrats - Pat Kemp, Kimberly Overman and Mariella Smith - are out of touch with their county wide constituents.

The Tampa Centric Democrats want the hundreds of thousands in Tampa Bay who use our interstates everyday, including Tampa Bay residents, businesses and tourists, to suffer as traffic congestion gets worse.