The lawsuit was filed by Plaintiff Hardam Tripathi on May 25, 2022 against the Hillsborough County Supervisor of Elections (SOE) and Vistra Communications, LLC.

This is a case about the public interest, and specifically, about the need for transparency in the operations of government and in the conduct of public elections. Plaintiff's Complaint asks only that Defendant, Vistra Communications, LLC ("Vistra") make available to Plaintiff's inspection public documents made transparent by Florida's public records law.

We reported here, here and here that in 2020 Hillsborough County SOE Craig Latimer took $2.9 Million of "ZuckBucks" funneled through the highly partisan nonprofit Center For Tech and Civic Life (CTCL). Latimer handed $2.6 Million (90%) of his "ZuckBucks" to marketing and PR firm Vistra Communications to launch a GOTV campaign.

Latimer never told the public about his $2.9 Million "ZuckBucks" nor how that money was hastily spent in the last 5-6 weeks leading up to the November 2020 election.
In this case the Plaintiff had made public records request to the SOE that included requesting records "directed to Vistra as a "Contractor", acting "on behalf" of a public agency" pursuant to section 119.0701 Florida Statutes. But Vistra has refused to produce any documents beyond what had already been produced by the SOE."
In this lawsuit, the Plaintiff seeks "an affirmative injunction requiring Vistra Communications, LLC to immediately produce all documents responsive to the Request that are in Vistra's possession, custody, or control or which Vistra had a duty to maintain under Florida law; and assess and award against Vistra Communications, LLC all Plaintiff's reasonable costs of enforcement of this action, including reasonable attorney's fees; and such other relief that this Court deems just and proper."
CTCL had never raised more than about a million dollars in any one year until Mark Zuckerberg handed them $350 million dollars in August 2020 to funnel to local election officials. CTCL was not staffed to handle such a large amount of money dropped in their laps and hand it all out in such very short time before the 2020 election.
CTCL could not staff up in time and it appears CTCL used other partisan organizations to do solicitations for them. From Exhibits 4, 5 and 8 included in the lawsuit, such solicitation appears to have occurred with the Hillsborough County SOE. 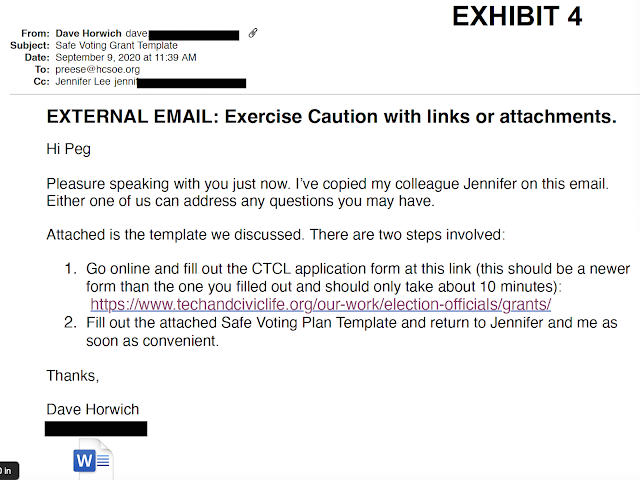 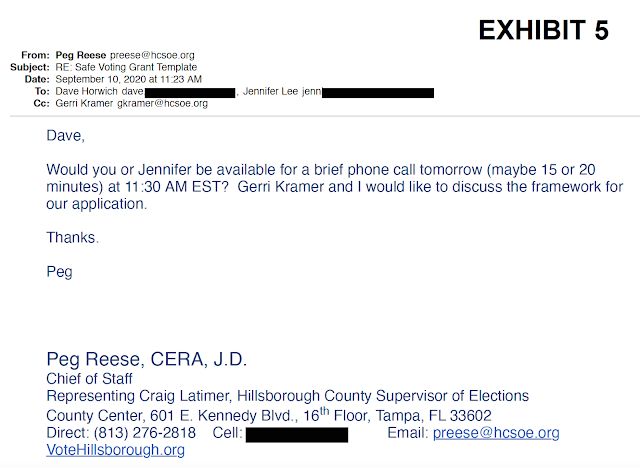 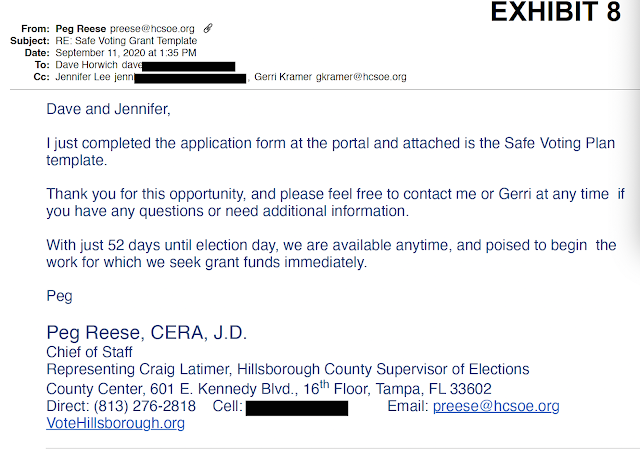 The solicitation to the Hillsborough SOE to get a "ZuckBucks" CTCL grant is dated September 9, 2020. Just days before on September 2, 2020, Geri Kramer, Latimer's Director of Communications, said Hillsborough was "Good" and did not need any of the "ZuckBucks" grant money.
Who is Dave Horwath? He is a "political counselor" who lives in Chicago and "an expert in issue advocacy, political engagement, and building issues-based social impact movements." Horwath is also the Managing Director of the Blue Haven Initiative. According to Influence Watch, Blue Haven was co-founded by wealthy Democrat donors who align with the Progressive agenda.
Who is Jennifer Camille Lee? She's a Progressive political activist and President and CEO of Progressive grassroots consulting firm JCL Strategies LLC.
Horwath and Lee are partisan political people. How much advising and instruction was Horwath and/or Lee giving Latimer about the "ZuckBucks" grants? Did they also advise Vistra about their GOTV campaign?
Why is the SOE sending Horwath/Lee copies of their CTCL grant request and telling them to call the SOE if they have questions? Why did the SOE tell Horwath/Lee they were ready to put the funds to work immediately when they had just submitted their grant request?
Why does the Hillsborough SOE have working relationships with Horwath/Lee and the highly partisan CTCL? Does the SOE have working relationships with other Democrat aligned organizations?
What all was going on between September 2, 2020 when Kramer said Hillsborough SOE does not need any "ZuckBucks", September 9 when Horwath/Lee solicited the SOE to submit the grant and September 11 when the SOE submitted their grant request?
In their grant request, the SOE stated they did not need any funding for additional personnel or equipment. The SOE said their biggest "need" was $2.6 Million to spend on what appears to be a GOTV campaign targeting specific voter demographics and pushing mail ballots.
Reading through the lawsuit, how did the SOE go from simply needing some additional funds for more "signage" into a "need" for $2.6 Million for a GOTV campaign? Horwath/Lee instructions?
CTCL awarded the SOE their $2.9 Million "ZuckBucks" grant on September 21, 2020.
Exhibit 10A (below) from the lawsuit is a copy of communication between Vistra and the SOE dated September 16, 2020. The SOE was working with Vistra before they received their "ZuckBucks" grant on September 21, 2020. It appears by September 16, 2020, the SOE had already decided to award Vistra a $2.6 Million no bid contract to perform a GOTV campaign on behalf of the SOE. 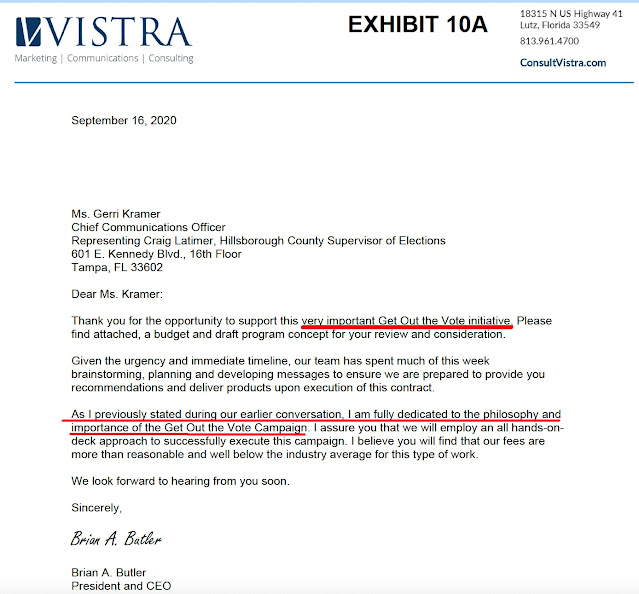 Why did the SOE select Vistra? We do not know because the SOE did not use a transparent RFP or bid process to procure the GOTV campaign work.
What all was discussed during the "earlier conversation" between Kramer and Vistra's CEO Brian Butler? What was Mr. Butler referring to when he stated "I am fully dedicated to the philosophy and importance of the Get Out the Vote Campaign?
Taxpayer funded agencies cozy relationships with PR firms, especially PR firms handed millions from a public agency in no bid contracts, breeds distrust.
On September 17, 2020, Kramer instructed Vistra to change the name of their proposal to "Voter Education Campaign". Nothing else changed in Vistra's GOTV campaign proposal except the name.
And Viola! Latimer received his "ZuckBucks" on September 21, 2020 and immediately awarded a no bid contract to Vistra on September 22, 2020.
Highly partisan private money was "funneled" through a public agency, the Hillsborough County SOE, with no transparency or accountability.
Latimer and Vistra have a "ZuckBucks" issue that neither of them have been transparent about.
Local media has been MIA ignoring the issue. They need to wake up and start reporting now that a lawsuit has been filed.
Hopefully this lawsuit begins to provide some answers the public deserves to know.
But if voters have doubts about his integrity and ethics, SOE Latimer may have a crisis of confidence on his hands.
And the 2022 election cycle is now fully underway.
Posted by Sharon Calvert at 12:19 PM