Voters in Pasco County take note of a lawsuit recently filed regarding two candidates who filed to run for Pasco County School Board District 1.

Case #2022-CA-2111 was filed August 15th in the 6th District Circuit Court in Pasco County. Plaintiff Steve Meisman, also a candidate who filed to run for Pasco County School Board District 1, filed the Complaint which can be found in its entirety here. 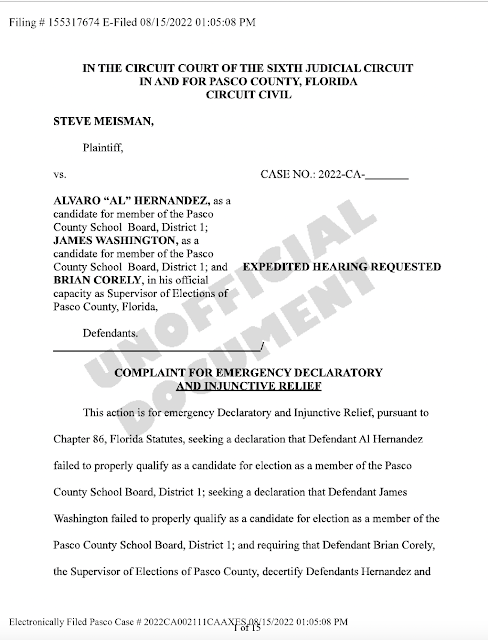 Florida law REQUIRES that each candidate for School Board at the time they "qualify" be a resident - live in - the District for the election they are seeking. Candidates must sign an oath they are qualified to run under the Constitution and the Laws of Florida.

The lawsuit states a Tampa Bay Times report on June 30 alleges Al Hernandez, a Republican, bought a small 884 square foot rundown home in Zephyrhills - that is in District 1. But Hernandez has never lived in the rundown unlivable home because he still lives in his 4346 square foot pool home in a gated community in Odessa - that is NOT in District 1.

Apparently Zephyrhills code enforcement has now shut down all work being done on Hernandez's 2BR/1B unlivable home because Hernandez never pulled any permits.

Hernandez still has Homestead on his Odessa home. The lawsuit alleges Hernandez was NOT living in the District 1 - his Zephyrhills shanty property - at the time he submitted his qualifying papers and therefore is NOT a qualified candidate to run for Pasco County School Board District 1.

Pasco County SOE Corley told the Times his office has no investigative powers and that someone would have to take the matter up with the Florida Elections Commission or through a lawsuit.

Apparently, when Washington submitted his qualifying paperwork he listed his residence as a PO Box in Saint Leo, Florida. The lawsuit alleges that while Saint Leo is in District 1, no one can "reside" at a PO Box address.

According to the lawsuit, since Florida law requires a "residency" address, a PO Box is not a valid residence in determining School Board District boundaries or "Voter Precinct Designation on the respective web portals".

Meisman's lawsuit also states that on June 17, 2022 at the close of the mandatory qualification period, Washington was being evicted from his residence in Hudson, Florida which is a Pasco County School Board District 5 residency. Therefore, when Washington "qualified" on June 13, 2022, he was still residing in District 5.

“Intent is good,” said Washington, a Pasco High teacher who moved into District 1 before the qualifying date.. “But intent is not what the letter of the law says.”

Meisman also alleges, that at the June 16, 2022 West Pasco Realtor's Association Candidate Forum, Washington had an opportunity to definitively state he lived in the District 1 residency area when he qualified. However, Washington failed to confirm he satisfied those requirements though he had declared it on his Candidate Oath just 3 days prior.

The lawsuit requests the Court to declare that Hernandez and Washington failed to qualify to run for Pasco County School Board District 1 in the manner stated by Florida law and rule they are ineligible to be on the 2022 Primary and November General Election ballots.

The lawsuit includes evidentiary Exhibits at the end of the Complaint.

Meisman, a Republican, requests the Court to either:

Enjoin Defendant Pasco SOE Corley to cancel the Pasco School Board District 1 election and name Steve Meisman as the only qualified candidate and unopposed winner, or

Enjoin Defendant Pasco SOE Corley to hold a special election between the remaining qualified candidates if the Court's decision is not rendered before the 2022 November General election.

The latest Court documents found at the Pasco County Court of the Clerk website reflect a Case Management Conference Hearing was called by Judge Susan Barthle for yesterday, August 17th at 4:30PM.

If allegations are true, shanty homes, evictions, evading State Law and not being truthful on Candidate Oath paperwork are big red flags.

We will continue to update this as the Court case proceeds.

Update: We understand the Zephyrhills code enforcement removed their stop work order on the unlivable house that Al Hernandez, a Regional VP with Humana, used as his residence address in his Candidate paperwork.

According to this Tampa Bay Times report of July 22, 2022 a Complaint regarding Hernandez has also been filed with the Florida Elections Commission:

Jessica Jecusco, a Florida Virtual School teacher who lives in Land O’Lakes, has filed a complaint with the Florida Elections Commission alleging that District 1 candidate Al Hernendez should be disqualified from the Aug. 23 ballot. She claims that he did not live in the east Pasco region by the June 17 qualifying deadline, as required by law.