While the Florida State Legislature passed a bill requiring that all local property tax hike referendums must be placed on the November General Election ballot, the effective date of that bill is 10/1/2022.

That enabled the Hillsborough County School Board to shamefully vote to place their property tax hike referendum on the August Primary ballot - a much lower turnout election. The low turnout Primary empowers the Teachers Unions and their ideologically aligned PAC's and organizations to activate their voter base to get out to vote for the tax and the Hillsborough school board candidates who support higher taxes.

Voila! On April 26, 2022, a new nonprofit Strong Schools, Stronger Hillsborough Inc. was established by Ron Christaldi. The paperwork establishing this entity states the organization is a tax exempt 501c4 nonprofit and it is NOT required to disclose its donors. 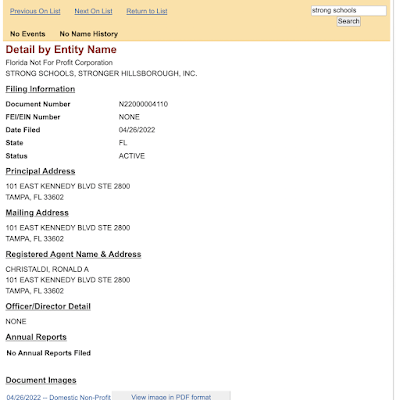 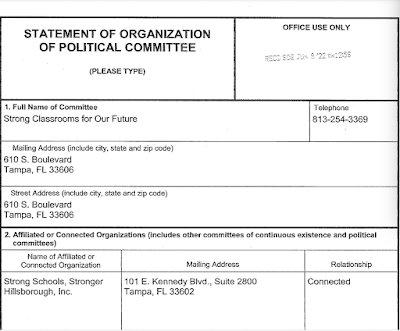 Who is Ron Cristaldi? He's a lawyer with Shumaker, Loop & Kendrick LLP, who has been front and center pushing for a new Rays baseball stadium in Tampa. Cristaldi was heading up the Tampa Bay Rays 2020 nonprofit with Chuck Sykes, a corporate organizing effort, in support of the proposed new stadium in Ybor City.

In 2018 Sykes Enterprise donated $250K and Schumaker, Loop & Kendrick donated $25K to the All for Transportation (AFT) illegal rail tax boondoggle. The AFT rail tax was thrown out as unlawful last year resulting in a $560 MILLION big refund mess.

Who has donated to the Strong Classrooms for our Future PAC? Who are funding the support of higher taxes for a fiscally mismanaged School District while taxpayers struggle with sky high inflation and declining real wages?

You will not be surprised!

The Teachers Unions, the local education Bureaucracy and wealthy special interests are funding the pro School tax PAC. This is why the Hillsborough County School Board put this tax on the low turn-out Primary Ballot. The School District, and obviously Jeff Vinik, did not want the School tax to be on the same ballot as the $18 BILLION rail tax fearing they would both go down in flames in today's economic environment.

Below is the logo - same as Cristaldi's nonprofit - found on the Hillsborough County School District website. While the School District cannot use the words "Vote for", those words of course are implied.

This is no coincidence that Davis calls his tax hike proposal the same name as Cristaldi's nonprofit. Was Superintendent Davis coordinating behind the scenes on the proposed tax hike with Ron Cristaldi?

The Hillsborough County commission could have pushed back on the School Board and request they place their tax hike on the November ballot when the largest number of voters vote. That was the intent of the bill passed this year.

The Hillsborough School District will receive about the same revenue increase as the property tax hike will provide due to growth, skyrocketing home and property values in the County. They are basically double dipping revenue increases on the backs of taxpayers.

Send a big message next week to the School District, the Teachers Unions and the wealthy special interests who keep funding tax hike referendums.

And Vote NO on the Hillsborough County School property tax hike!

Posted by Sharon Calvert at 5:23 PM