According to the All for Transportation (AFT) latest campaign filing, special interests dumped over $166K more into the AFT sales tax that was ruled unlawful on Monday.

No wonder BOCC Chair Overman scheduled yesterday's special meeting an hour before another meeting was already scheduled. No wonder the 5 Democrats voted to cut public comment to 90 seconds.

The meeting was a joke. It was just an administrative requirement they had to hold because the 5 had already made their decision. Gwen Myers told the public that on Tuesday. The optics from the meeting were a three ring circus.

The 5 Democrat commissioners had already taken direction from AFT and their wealthy elitists donors. They voted to put another unlawful AFT sales tax, crafted behind closed doors and outside Sunshine, back on the ballot.

Now AFT's wealthy special interests let these 5 commissioners know what they must do "for them". The special interests will be enriched and benefit the most from the $23 BILLION AFT sales tax so they buy influence.

Below are the latest special interests donors to dump their dollars into AFT. This information was taken from the Hillsborough County SOE's website. 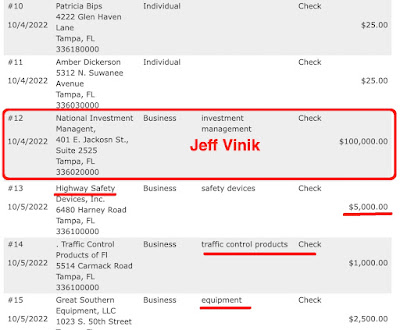 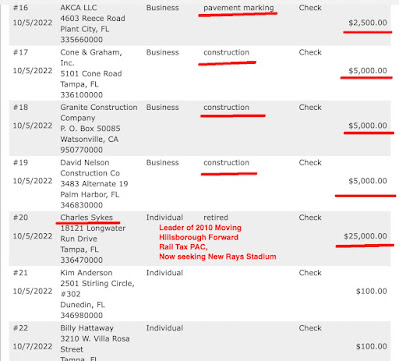 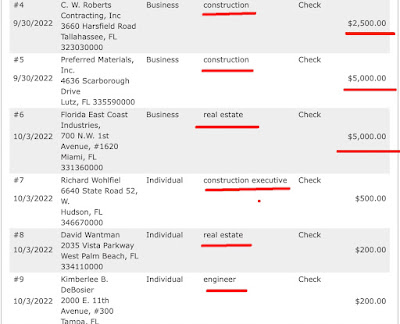 This is why no AFT leader or anyone associated with AFT showed up last night to speak in support of the appeal. Their special interests bosses had already called in the chits to the 5 commissioners so there was no need for AFT to show up and say anything. They knew their deal was done.
The Tampa Centric 5 Democrat county commissioners are NOT working for the taxpayers of Hillsborough County.
They are working for AFT's wealthy special interests donors.
And that is why, even after being warned, the 5 Democrat commissioners voted last night to waste more taxpayer dollars to appeal Monday's AFT ruling.
The chits were called in and the favors had to be done.
This is corruption and it must be stopped
Hillsborough County taxpayers must stop being abused by these 5 Democrat commissioners who are incompetent and negligent stewards of their tax dollars.
Voters can get rid of Overman, Cohen and Smith in November so do it!
Posted by Sharon Calvert at 1:59 PM