Fiscal Insanity: All for Transportation Is A Tax Hike Scam to Bailout Financially Failing HART HART is going insolvent and will go over the fiscal cliff soon. They want a taxpayer bailout.

Obligingly, the Tampa Centric 5 Democrat county commissioners put the 30 year $23 BILLION All for Transportation (AFT) sales tax hike on the November ballot. They mandated that 45% ($10-11 BILLION) - the largest share of the $23 BILLION AFT sales tax hike - must go to HART.

Four of the Tampa Centric 5 (Overman, Smith, Kemp, Myers) sit on the HART Board with AFT Chair Tyler Hudson and AFT spokesperson Rena Frazier. They all know HART is going broke because it's happening on their watch.

They want taxpayers to punish themselves with a $23B new tax to bail out HART, cover up HART's financial mess and leverage the tax dollars to fund costly Tampa rail.....that benefits the wealthy AFT donor base.

The misleading AFT ballot language states the tax will be used to "expand public transit" and "enhance bus service". But HART documents have stated:

If the sales surtax measure is approved by Hillsborough County voters in November 2022, HART would be able to achieve its goal of financial sustainability..

HART is not financially sustainable and why they want a taxpayer funded bailout.

But HART's ridership is dismal and their operating costs are soaring. The HART Board knows this and so does the County.

HART CEO Adelee Le Grand presented at the March 10, 2022 BOCC Transportation Workshop. She presented a chart of HART's dismal FY21 ridership (comment in red is mine).

With Hillsborough County's population of over 1.5 million, HART's daily ridership in FY21 was about 1.8% of the total population.

At the September 26, 2022 HART Board meeting, this was presented showing HART's ridership declined in FY22 (comments in red are mine).

10 percent of HART's total ridership is from the Tampa Streetcar because the Streetcar is "free to the rider". FDOT has been 100% subsidizing for years the Streetcar for all riders with your tax dollars whether you ever ride it or not. The Streetcar is a tourist amenity that should be paid for by tourist taxes.

No one in their right mind, no one with any sense of fiscal responsibility and no one with basic common sense would force County taxpayers to hand the flailing HART 45% ($10-11 BILLION) of new sales tax dollars. That is insane!

The governing HART Board is to blame for HART's fiscal woes. They refused to force HART to address its dire financial position - pinning their "hopes" on a new sales tax. That is bad governance, poor judgment and fiscal negligence.

When transit ridership tanked during COVID, HART received about $100 MILLION of COVID relief funds. While others were struggling, the HART Board approved huge raises for HART's highest paid top administrators:

The HART Board doled out huge raises - now baked into HART's future budgets - using one-time COVID relief funds. That is fiscal malfeasance.
Like the County, HART has numerous funding options. HART, like the School District did, can put their own referendum on the ballot to raise their existing .5 mil property tax to a maximum of 3 mils.
HART should let voters decide separately if they want to increase HART's revenue. Force HART to tell voters specifically what the new revenue would fund.
At the April 4th HART Board meeting, 48 funding options (page 23), including 17 local funding sources, were presented to the Board. 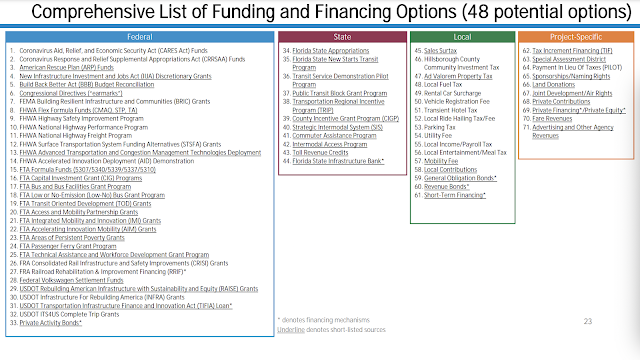 At that meeting, HART's only consideration for new local funding is a sales tax hike.
HART's finances are sinking. They will go insolvent in the next few years. No one is telling this to the voting public BEFORE they vote. Local media refuses to report about HART's looming insolvency.
So the Tampa Centric 5 commissioners put AFT's $23B sales tax hike HART on the ballot with misleading and politically polluted ballot language. They then mandated HART get the largest share of the AFT tax in the fine print found elsewhere.
To fraudulently scam voters to bailout out HART.
Posted by Sharon Calvert at 8:55 AM