All for Transportation Sales Tax Is A Fraudulent Tax Hike Scam, Hold Incumbents Responsible in November

The 30 year $23 Billion All for Transportation (AFT) Sales Tax is a fraudulent tax hike scam.

AFT is a scam to spend 60% or more of the AFT tax dollars in the city of Tampa when taxpayers in unincorporated Hillsborough pay 74% of the tax.

On October 10th, the All for Transportation (AFT) sales tax ballot language was ruled misleading and confusing by Judge Moe. The Eye was there as Moe made her ruling from the bench that threw the AFT tax hike referendum off of the November ballot.

The transcript of the October 10th hearing can be found here. From the bench, Gaylord Moe ruled:

The ballot summary and title mislead the public as to the effects and ramifications of the proposed transportation surtax.

At the lawsuit hearing, AFT leader/Vinik employee Christina Barker left the courtroom while the County's outside legal counsel was stating the County's case. Did Barker see the writing on the wall?

No wonder there are rumblings that AFT knows their sales tax hike scam is dead....AGAIN!

And we would agree. We believe the appeal pursued by the feckless 5 Democrat commissioners is futile and will fail.

The ballot is tainted because the $23 BILLION AFT sales tax was created to intentionally deceive voters in Hillsborough County.

The AFT ballot language was politically polluted intentionally for political gain. How do we know? Because David Smith, HART's legal counsel, told us.

we use something closer to the original ballot language and that was agreed to by the County and they moved back to language that was a lot closer to the original ballot initiative [2018 ballot language] and although that's primarily a political consideration, it is a set of verbs and provisions that has been approved once by the public and it tests will with the public is my understanding and therefore, we wanted to try to maximize the opportunity to obtain approval of this referendum.

Smith's comments confirms what we have said. AFT's ballot language is specifically used as a poll tested political pitch to deceive voters for political gain.

The AFT tax hike is a transit tax. AFT mandates transit agency HART must receive 45% of the AFT sales tax dollars, the largest share of the total tax.

But HART is going insolvent. HART is seeking a taxpayer bailout from the $23B AFT tax hike.

Operating cost increases are currently being offset by one-time federal COVID-19 relief funds, the last of which is expected to be expended by HART to support operations in FY's 2024 and 2025. Once these funds are expended, HART will need to identify a new operating revenue source, reduce operating costs, and/or use its reserve funds to achieve a balanced operating budget and financial sustainability.

If the sales surtax measure is approved by Hillsborough County voters in November 2022, HART would be able to achieve its goal of financial sustainability...

The Tampa Centric 5 commissioners put the $23B AFT sales tax on the ballot mandating HART receive the largest share of the tax. They tainted the ballot language with a poll tested political pitch to mislead voters and hide HART's failing financial position.

The Tampa Centric 5 commissioners and AFT failed to inform the public that HART has an existing dedicated revenue source, a .5 mil property tax. HART's property tax is paid by all property owners in Hillsborough County, except Plant City who is a not a member of HART.

The Tampa Centric 5 commissioners and AFT failed to inform the public that Florida Statute 163.570 gives HART the authority to raise its property tax millage 6 fold to a maximum of 3 mils.

Four of the Tampa Centric 5 commissioners, Kemp, Overman, Myers and Smith sit on the HART Board along with AFT's Chair Tyler Hudson and AFT spokesperson Rena Frazier.

We searched but did not find anywhere, including during meetings about HART's dire financial position, there was ever any discussion about HART using its own authority to raise its own revenue.

Therefore, it is unclear whether the HART Board ever informed HART's latest CEO, Adelee LeGrande - who came from Atlanta -  that HART has their own authority to raise their own revenue. If she was not informed, this is gross negligence by the HART Board.

FIS information was included in agenda item B-1 of the April 4, 2022 BOCC meeting. That agenda item was to vote to schedule the April 20th public hearing to put the AFT sales tax on the ballot.

However, no FIS information was included in the information the County made available to citizens at the April 20th public hearing. Therefore, the public could not question or weigh in on the FIS information. This information, requested by voters in a 2012 Charter Amendment that passed, is to inform taxpayers what the AFT sales tax was going to cost them.

Kevin Brickey, Director of Management and Budget, held a meeting on August 16, 2022 with the Internal Auditor Melinda Jenzarli and the Public Works Administrator John Lyons to approve the recommended FIS language drafted by Brickey. Sam Hamilton from the County Attorneys office also attended the FIS meeting as a non-voting participant.

The FIS was approved 3-0 at the August 16th meeting.

Section 8.05 of the County Charter states the Financial Impact Statement shall be placed on the ballot immediately following the ballot question - which it was for the 2018 AFT sales tax ballot.

What happened between the 8/16 FIS meeting and when the AFT ballot language without the FIS was sent to the Hillsborough County SOE's office to be included on the printed ballots? Was it incompetence, sloppiness or the information intentionally excluded?

A Public Records Request has been submitted about this issue. We hope to get a response that answers why the FIS was excluded from AFT's 2022 sales tax hike ballot. The public deserves an answer for why the County violated County Charter Section 8.05.

The 2017 ten year transportation funding plan was supposed to remain in place even if an AFT sales surtax was passed.

As we reported here, in November 2018, then County Administrator Mike Merrill and County Commissioners Overman, White and Miller told the Tampa Bay Times that the 10-year funded plan was a promise and should remain.

'The $800 million is a done deal,' County Administrator Mike Merrill said. He said Hillsborough County will go forward with the $812 million road plan...

'I think the worst thing the county commission could do at this point is turn its back on roads funding and abandon that policy initiative,' commissioner Stacy White said. 'I will fight tooth and nail to assure that that funding remains in place.'

'We already made that commitment,' Overman said of the roads plan. 'We should make sure that happens.'

Three commissioners - Les Miller, Overman and White said the tax money should be spent in addition to the county's [AFT tax] money, not instead of.

However, just as we warned in 2018, the bait and switch then occurred. The Tampa Centric 5 commissioners eliminated the 2017 road funding plan breaking promises the County made to their constituents.

With property tax and other revenues flooding the County budget over the last 5 years, there is way more than enough revenue to fund the 2017 transportation plan. If the plan had been left in place, the County would have benefited from the many road improvements the plan funded.

Once they put AFT 2.0 on the ballot, the 5 commissioners handed engineering firm HNTB a $700K taxpayer funded contract to make the public think the County had a plan.

But that HNTB contract is a wasteful $700K joke too.

I asked questions directly to the County about specifically what the $23B AFT sales tax will fund, e.g. how much and where new road capacity will be built, how much congestion relief the sales tax hike will provide and to provide a consolidated list of specific projects from the County, the municipalities and HART that the tax will fund.

The TPO's LRTP is so outdated with old cost estimates, outdated analysis and includes road projects now completed or others that are underway and already funded.

The TPO's LRTP was never voted on by the entire county commission. The County does not take direction from the TPO. The TPO has no authority to dictate how the County decides to spend their local tax dollars.

The TPO's LRTP is a "fairy dust and unicorns" 20 year scenario planning tool. It looks at various scenarios and various funding levels. It is a 20 year scenario wish list not an engineered transportation implementation plan.

Since the County has no transportation plan, the Tampa Centric 5 put a 30 year sales tax on the ballot to fund the old and outdated 20 year TPO "wish list" plan  that has little to no relationship with reality.

By their own admission, the County admits the AFT sales tax is a 30 year tax to fund a 20 year plan. So basic math stipulates the 30 AFT sales tax can never deliver on all the promises made by the Tampa Centric 5 and AFT over the 30 year life of the tax.

The County is not being honest about all the existing revenue sources that can be used to fund transportation without a new massive sales tax hike (emphasis mine):

In addition, the County can use Tax Increment Financing (TIF), like growing Pasco County, does to fund transportation projects.

Now another AFT sales tax hike has been ruled unlawful but the referendum is still at the very bottom of the printed ballot.

Therefore, make sure to Vote NO on the tax hike referendum so taxpayers do not end up in another huge refund mess if the lawsuit continues to wind through the court system for years and years.

The $23B AFT 30 year sales tax is a deceitful and fraudulent tax hike scam.

The deception and violation of the public trust must stop!

That starts by getting rid of the commissioners running for re-election who put another unlawful AFT fraudulent tax hike on the ballot in November. 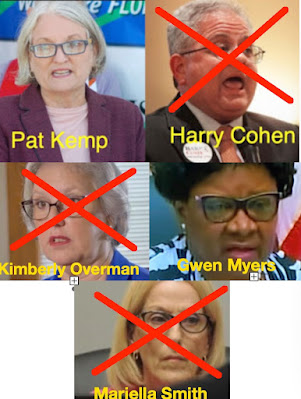