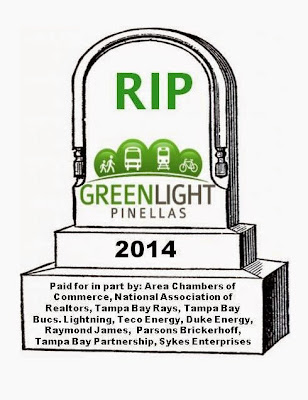 Boatwright lays out a scenario that blames voters for rejecting a horrible Ordinance, and an ill conceived plan called GreenLight and hints that defeat will lead to  most of the development problems the County will see in the next century or so.

Let me burst the bubble of those who would lay the blame for all things bad in Pinellas County at the feet of those who voted down GreenLight.

Those to blame for any transit oriented problems Pinellas County may endure in the short term future are those who developed the GreenLight plan, not those who recognized it for what it was a get rich scheme for a select few funded by a never ending flow of tax revenue.

If the objective of the politicians, the Chambers of Commerce and the big power players who wanted redevelop south Pinellas County is to make those of us who worked to defeat GreenLight and those who voted with us feel bad, sorry that dog does just not hunt.

If those folks really want to know who screwed up Pinellas County Public transportation, all they have to do is take a short walk down the hall to the smallest room in their house and look in the mirror.

Boatwright rambles on about the sea of parking lots and how in some way this referendum would have changed all of that, all the while the auto industry is having its best year ever. Obviously not everyone wants to ride a bike, bus or train.

Also noteworthy is the fact that the Countryside Mall, which is mentioned as an example of large surface parking, is miles from the GreenLight proposed rail route which is indicative the how ill conceived the GreenLight plan really was.

If you voted NO on GreenLight don't let the naysayers make you feel bad, they're just trying to butter you up for their next attempt fleece to public.

For now take comfort in the knowledge that your NO vote on GreenLight probably saved Pinellas County from one of the most ill conceived tax referendums every put forth in this County.