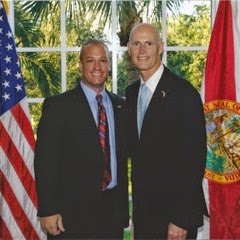 My conversation with Nick DiCeglie continues....

"The demographics are changing here in Pinellas County. The Hispanic and Asian populations are growing and overall the average age is dropping. What approaches will you take to reach these emerging voters, and have them represented in the Republican Party Pinellas County organization?"  I asked.

"What’s so important and we saw it in the Senate races, we need to have good, solid, qualified, viable candidates that can articulate our message and our platform," Nick replied.

"And take that a step further, we must have the ability to identify where they should go when they’re on the campaign trail to connect with various minority voters like Hispanic voters, African-American voters and Asian voters.  We must connect with them in their communities.  Senator Rand Paul is doing an outstanding job in this regard.

Let's look at what Rick Baker did. When he first got elected, and correct me if I am wrong, but I think he had very little African-American support the first time he ran.

But when he ran for reelection, because he went to those communities, his support wasn’t 51% it was well over the 75% level of support because he took the time and the energy to go into those communities and listened to find out what would be needed, what were their issues and he took action on their behalf to improve their communities.

To me, that’s s an example we can certainly follow and try to replicate because it was sincere and it worked. It worked to perfection and that’s one reason why Rick Baker is such a great leader."

"What role or to what extent does the County organization or the Executive Committee play in selecting candidates or setting up who is going to run? I asked.

"Great question, in the last two years we haven’t had had a major role in identifying potential candidates, so I'm looking forward to that process.

I feel I’ve got a lot of community connections from the years of me being extremely involved, so for example, I have a very good friend who’s involved in St. Pete politics and knows the people involved.  He’s a great professional, really knowledgeable about who’s who and what’s what in St. Petersburg politics and will be a great asset to help us identify quality, viable conservative candidates to run for these important offices.

I would like to have representatives like that and a connection to each of the municipalities so that we can identify as a Party who are the leaders in these different communities. Who are the young people moving through the ranks? Who are the people that have been involved for a long time who understand the various ins and outs of the communities where they live.

That can equate to strong candidates for the County Commission, constitutional officers, State House and Senate races.

I think having those connections in the community is having a pulse of what's going on. It's going to help us, as a Party, find quality candidates that are going to be able to articulate our Republican platform.

It's about the quality of the candidate that really makes a difference.”

"With the voting population almost evenly divided in Pinellas County how will you go about reaching out to the undecided and non party affiliated voters?"  I asked.

"Certainly I am going to encourage not only our Executive Board but the Executive Committee as a whole to get involved. Get into Rotary Clubs, get into the various community service clubs, speak with your neighbors and fellow church parishioners and send the positive Republican message.

Doing that over time, doing that sincerely and doing it consistently, having a consistent message is the key. I think that approach begins to evolve to the point where people say I know John Doe or Sue Ann and they're involved in the Republican Party and I want to get involved too.  They are making a difference.

It is not what we see on TV. I think Republicans have a perception issue due to the media painting a negative picture of our party.  If we want to change this perception, taking whole bunch of money and throwing it at the problem will never get to the root or the core of the problem.

It is going to take one on one relationship building and cultivating those relationships over a long period of time.  The rest will take care of itself."

In the next Post, Nick talks about early voting and its affect on the campaign process, social media, how national politics will impact local races, and how his family feels about his expanding role in local politics.