Two of the faces of South St. Petersburg 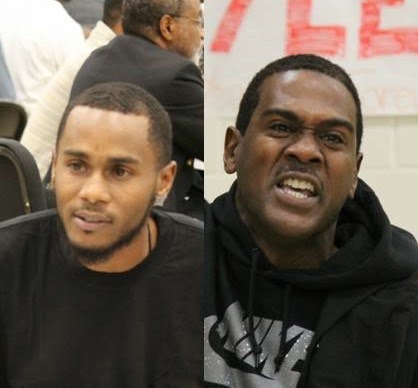 The objective of these meetings is to meet with residents of the south side neighborhoods and get insight as to how to improve the relationship with south side residents, City Hall and the Police Department. This meeting was held at Gibbs high school.

The issues with south St. Pete are not going too resolved until all of the City Council stays engaged.

A short time into the meeting, which is essentially a table top meeting where small groups give input to the City staff, a young man began yelling his grievances in a loud voice from the back of the room. He was angry and frustrated his face, as in the picture above, showed both the anger and the fear that exists in South St. Pete. Most of those in attendance stopped to listen, many just kept on talking at their table.

Across the room another young man also pictured above spent his time talking about the issues and his experiences with the police department in a calm and at times tearful way. Focused on the opportunity, he tried to give meaningful input.

It would be easy to write off the frustrated, yelling and angry young man, but that would be a big mistake. I think these two young men represent the breadth of the problems in south St. Pete and define the scope of the problem at hand.

There are many who find themselves between these ends of this spectrum. Many who long for a solution to a problem decades in the making.

These faces are the faces that must find those solutions.

I am not sure what the answers are, but a few meetings, some cops getting out of their patrol cars and walking around, while a good start cannot overcome the range of these emotions.

Finding the solutions will take everyone.

Be sure to scroll through my Gallery of photos at St. Pete Town Hall Meeting.  The faces really tell the story.