City of St. Pete and the Arts at a Crossroad 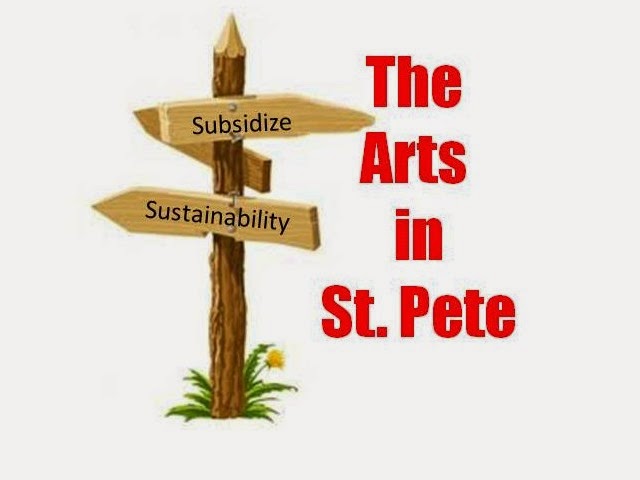 Thursday Wayne Atherholt presented his plan for the $200,000 for Arts funding. It met with mixed reviews from City Council.

It would appear that the Kriseman administration would rather move to a sustainability model as opposed to a subsidy approach. Several times deputy Mayor Tomalin reiterated the Administration's position of developing sustaining models which will bring customers to artists and the arts community as opposed to supporting individual artists.

City Council has complained in the past about a steady stream of requests from the arts community for money and funding. Nothing will serve to continue the stream of artists and art projects with their hand out than a continuation of subsidies.

Essentially giving public funds to artists who create art, pile it up in a corner of their studio hoping someone will wander in and buy it is just not a sustaining model. Not for the arts community and certainly not for the City.

Atherholt's plan, with some reasonable tweaking, will do much more to serve the arts community than doling out money through some arts group that will, 1) not really resolve the arts business problem and 2) will likely lead to complaining, controversy and misuse of the funds.

It will be a tough sell to switch the focus from supporting starving artists to a mechanism that will cause them to be successful business people as well as artists. There are several on City Council who are pushing to continue the subsidy approach to dealing with the arts. Some of it is genuine concern, some with an eye toward the upcoming election.

Creating a community of subsidized artists doesn't really address the concept of an arts community or an arts "destination". It just creates another group of people getting a government handout. The whole concept of "starving artists" is that they will finally get hungry enough to create something that will sell and work to sell it.

Kriseman and his team are trying to head in the right direction. City Council needs to carefully think through their approach.

If the arts as a community and a business is to thrive in St. Pete the best thing the City can do is to support the arts community and the arts business. Not give money to people to create art that has no market.