The Mayor, City Council and the Rays 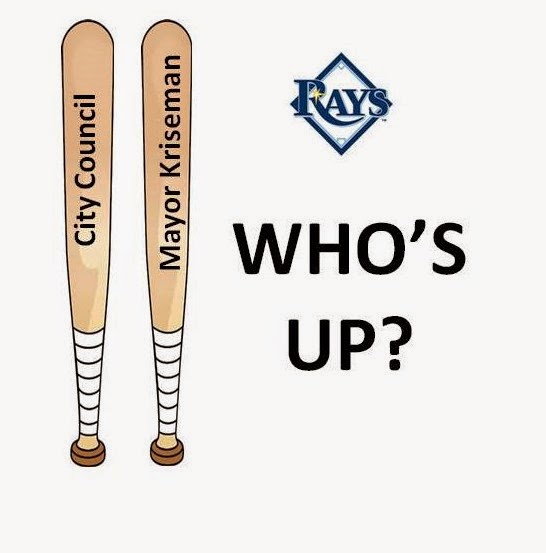 Everything seemed pretty cordial, given the fact that Mayor Kriseman had sent a letter to staff and employees indicating they should not do anything to support the workshop, until Council member Wengay Newton questioned City Attorney John Wolfe as to his ability to give the Council direction given the Mayor's order.

Mr. Wolf made it crystal clear he does not report to the Mayor and the office of the City Attorney serves both the Mayor and City Council equally.

I was with the City about 28 years and I can't recall any time where a strong Mayor directed staff not to support a City Council effort.

There were no staff members at the meeting other than, City Administrator Gary Cornwell, looking a bit uncomfortable, the City Clerk and the City legal department.

The rest of the City Council seemed willing to let the Mayor's memo slide, but there was an underlying sense of concern.

Council Chairman Charlie Gerdes, who called the meeting, barely acknowledged the Mayor's memo, and only fired a shot at the very end of the meeting when he said. "There will be many more workshops."

Kriseman, in my opinion, screwed up in a big way. The memo, which seems much more like a Kevin King response than a Rick Kriseman response, served no real purpose. It puts staff in an untenable position when they are approached by City Council or the media and overall creates a poor working environment all the way around.

Cooperation between the Administration and City Council on the Rays and probably a host of other issues is on the way out the window.

Kriseman needs to apologize to City Council and staff for his "I am going to take my ball and go home" approach and get his whole team, Council, staff and administration back on the same page.

Nothing would make the Rays any happier than getting the Mayor and the City Council in a strident fight about who is going to make the decisions about baseball. It just makes St. Pete look like the little backwater town baseball keeps saying it is.

I am pretty sure there are some ruffled feathers up there on the dais. Will City Council retaliate for being treated like the Dream Team's step child?  I don't know but it would be in everyone's best interest if the Mayor stepped up and tried to put Humpty Dumpty back together.

As far as the Rays are concerned, Bud Selig said it in the late 1980's, "St. Petersburg is not a major league baseball market." Baseball still believes that and the last ten years have proved it.

These workshops will neither hinder nor help much in the Mayor's Rays effort, but if the Mayor allows his administration to be torn apart by the baseball issue simply because he wants to be "Mr. Baseball", then everybody loses.