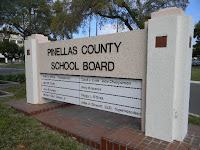 All of these under performing schools are in St. Petersburg and the City has to take some of the responsibility.

I can't remember anything that has outraged me as much as the exceptional Tampa Bay Times expose Failure Factories by
Cara Fitzpatrick , Lisa Gartner and investigative reporter Michael  LaForgia.

The quality of the investigating and reporting gets lost in your rage as you read what has happened to most defenseless children in our community.

One of the first questions that all but screams from your mouth is WHO is responsible for this?

Pictured here are the eight most likely culprits: the Pinellas County School Board and their handpicked superintendent.

Read their comments in the Times article and you will laugh and then cry. How can these people be so out of touch, uninformed so "not knowing what they don't know?"

The answer is simple because they want to be uninformed.

But are they really the responsible ones?

1. Did YOU vote in the last School Board election?
2. Did you not do any research and just vote for the incumbent?
3. Are you retired and either
a. Didn't bother to vote because you don't have
any kids in school here
b. Just voted for the first name on the list
4. Have a kid in one of those high white population schools and voted for the current
board members that gamed the system that way?

Well, I think you are to blame.

A lot of these School Board Members, many who have served far too long, fully realize that if they make sure the white schools stay white and make sure those parents feel that a vote for them will keep it that way they can be pretty sure of getting reelected.

Every time a parent gets a kid in one of the "good schools" properly worked that parent can easily become a vote for the incumbent.

All of these underperforming schools are in St. Petersburg and the City has to take some of the responsibility.

When we had a Mayor, who was willing to work at education and not just talk about it these schools were working steadily toward improvement. The last thing anybody on the School Board wanted to do was tangle with Rick Baker.

They barely give Rick Kriseman the time of day.

Kriseman's answer: hire a couple of wannabes to handle the problem so he doesn't have to deal with it and move on.

That will not work.

The Pinellas County School Board only understands one thing – power. Send a couple of low level or high level employees out on this one and absolutely nothing will happen.

It's time for some tough plays.

The Governor should step in and call for independent investigation. The Department of Justice should investigate to see if these kids civil rights to an equal education has been violated and if so any School board members who were part of any wrong doing should be charged, tried and jailed if they are
found guilty.

Here we are spending $50 Million plus on a Pier that will likely be a flop, another $20 Million to build a nice walkway to that Park and a place for a couple of restaurants probably built by big campaign contributors and a pretty view for the folks from their million dollar condominiums and 40 or so blocks away we have five of the worst schools in Florida and arguably
the worst school board.

And don't give me the money is allocated bullshit when kid's futures and their safety is at stake there is no such thing as untouchable public funds.

Kriseman gets a couple million more in tax revenues and what does he want to do?

How about this instead of paying another million or so in public dollars so the drunks can sit around their bars until 3 AM swilling craft beer, why don't we shut the damn bars down at midnight or 1:00AM and put some law enforcement on the south side and in the schools so the kids that want an education can get one.

Kriseman has had his priorities screwed up since he was sworn in.

Superintendent Mike Grego has pledged he will fix these problems.

Let me tell you what Superintendent Grego will do.

He will do exactly what he is told by the people setting on the School Board dais and not one thing more.

Next time you get your Trim (Truth in millage) statement look at how much all of this costing you, now reread the article Failure Factories to see what you're getting