The Four Forty Four - Much more than just a bus route 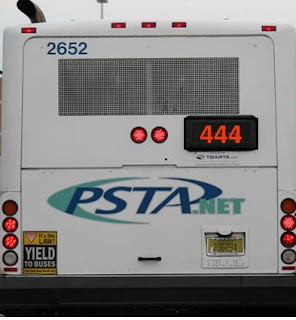 Wednesday was one of those rare days when I actually felt bad for the PSTA Board. Four bus routes were on the chopping block.

The PSTA Board room was nearly full.

Public hearings are often emotional when they deal with subjects that directly affect people's lives. This one really tugged at your heartstrings.

Speaker after speaker labored to get to the podium on crutches, walkers and in wheel chairs. Some spoke for others in attendance since it was just too difficult for them to speak in person.

Each told of how much the 444 bus route means to them. They used words like freedom, dignity and independence.

Others spoke of the 444 as their lifeline to get to and from work. Some had been riding the 444 for years.

Eliminating the 444 would disrupt their lives perhaps end their independence.

These were real people, with real fears and real tears.

The 444 bus route is the least used of all the PSTA routes. The route has just over 20 borders a day.

It runs through Pinellas Park and stops at the Wal-Mart on US 19. It is not a particularly efficient route as it meanders around. Getting back to one's original starting point can often take in access of an hour. However, that inconvenience pales into comparison with the benefits to a small group of riders.

The 444 has been on the chopping block before, but this time with PSTA facing a real budget crisis, and it looked like the 444 was doomed.

The PSTA administration is looking at a number of options, including conversations with UBER but the 444 riders didn't seem to be buying it.

In the end, PSTA Board was moved and saved the 444 for the moment.

They ask for more information about the options 444 riders will have and for an improved plan to make the riders more aware of their options. However, they also indicated that the days of the 444 are probably numbered as the PSTA evolves a new public transportation plan.

There are a lot of tough days ahead at the PSTA and lot more stories from people whose very existence depends on public transportation.

We all need to listen closely. When you don't depend on public transportation, it is easy to not appreciate how important it is to those who do need it.

The PSTA administration and the Board must come up real, sensible plans and when they do we, the voters, must make sure the funding is there to support those plans.


Disclosures:
Contributor: Waterfront Charter Amendment (Vote on The Pier), Carly Fiorina for President.
Posted by Gene Webb at 8:00 AM