Kriseman on Trump is that what you elected him to do? 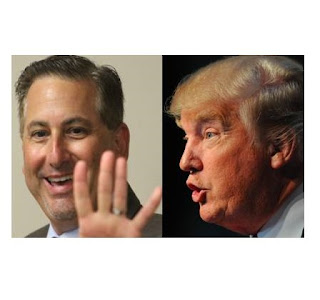 Now is time for leadership from public officials not late night cute tweets.

Pete Mayor Rick Kriseman, perhaps spending just a bit too much time online, couldn't resist the opportunity to jump on the latest Trump statement regarding US domestic terrorism.

​DONALD J. TRUMP STATEMENT ON PREVENTING MUSLIM IMMIGRATION
(New York, NY) December 7th, 2015, -- Donald J. Trump is calling for a total and complete shutdown of Muslims entering the United States until our country's representatives can figure out what is going on. According to Pew Research, among others, there is great hatred towards Americans by large segments of the Muslim population. Most recently, a poll from the Center for Security Policy released data showing "25% of those polled agreed that violence against Americans here in the United States is justified as a part of the global jihad" and 51% of those polled, "agreed that Muslims in America should have the choice of being governed according to Shariah." Shariah authorizes such atrocities as murder against non-believers who won't convert, beheadings and more unthinkable acts that pose great harm to Americans, especially women.

Mr. Trump stated, "Without looking at the various polling data, it is obvious to anybody the hatred is beyond comprehension. Where this hatred comes from and why we will have to determine. Until we are able to determine and understand this problem and the dangerous threat it poses, our country cannot be the victims of horrendous attacks by people that believe only in Jihad, and have no sense of reason or respect for human life. If I win the election for President, we are going to Make America Great Again." - Donald J. Trump

Kriseman Tweet
“I am hereby barring Donald Trump from entering St. Petersburg until we fully understand the dangerous threat posed by all Trumps,”

Guess we won't be seeing anyone named Trump vacationing here for a while.

You can catch the read from the left in Janelle Irwin's saintpetersblog Post Rick Kriseman unofficially “bans” Donald Trump from St. Pete and it’s exactly as awesome as you’d think

You would think that the Mayor of a City whose administration dumps raw sewage into Tampa Bay and Clam Bayou, can't seem to get the $40 million Pier Park project name right, has five failing schools in his jurisdiction and a continuing poverty and crime problem on the south side of his City could put his time to a bit better use.

While the Tweet obviously is generating a lot of humorous and serious attention, those of a more conservative bent, making winter vacation plans might also consider themselves' unwelcome.

Sarasota is nice this time of a year.

Am I all in on Trump's latest comments? Not necessarily.

However, I do wonder how clever the Mayor would be if the events of San Bernardino had taken place in Tampa or St. Pete.

We face a serious threat in this country, far beyond anything any of us have ever seen. It's pretty easy to jump on a suggestion as seemingly over the top as Trump's latest remarks, but given a couple of more of these incidents that could easily change.

Now is time for leadership from public official's not late night cute tweets.

Grow up Rick...you have a serious job to do.


Disclosures:
Contributor: Waterfront Charter Amendment (Vote on The Pier), Carly Fiorina for President
Posted by Gene Webb at 9:27 AM