A roundup of recent media on the Go Hillsborough debacle and our transportation issue.

We'll start with the very latest. County Administrator Mike Merrill continues to orchestrate media reporting about the Go Hillsborough crony mess he helped create. We still find it odd that he asked for a Sheriff's investigation for events he caused and occurred on his watch.

Apparently Merrill's original talking points he handed the Tribune weren't clear or correct causing the Tribune to make a major update to their online version to their story Sheriff finishing Go Hillsborough probe, release set next month. The Tribune first reported that the investigation was complete as if all nicely tied up in a package ready to be released but then they had to make an update (emphasis mine).


County Administrator Mike Merrill, in an e-mail Tuesday afternoon, told county commissioners the investigation was complete. He later sent an e-mail to the Tribune clarifying that only “field work” is done, including interviews and document analysis.

“Technically, the investigation is ongoing until the sheriff issues the final report,” Merrill said

How did Merrill leave out that important information to begin with? Perhaps he's in over his head.

Did the Tribune finally contact a HCSO spokesman instead of relying on Merrill's talking points?


Sheriff’s spokesman Larry McKinnon said once all parts of the investigation are wrapped up, a copy of the final report will be sent to the State Attorney’s Office for final review.

“We will notify the public and media via a press release when the investigation is completed and finalized by the SAO,” McKinnon said in an e-mail.

The Tribune reports what we have been saying from the start - the transportation initiative was always about pushing another huge sales tax hike:


The group [Policy Leadership Group] has been meeting for two years, trying to develop a comprehensive transportation plan that voters would support with a half-cent-per-dollar sales tax increase.

Moving on to other recent media attention of our transportation issue. On December 25 it was reported by the Tribune that Florida has 1000 people a day coming to Florida and most will be bringing their cars.


That influx is not expected to slow down anytime soon with the state’s population predicted to rise to 26 million by 2030, according to the Bureau of Economic and Business Research at the University of Florida.

The Eye posted a response here.


The vast majority of the new arrivals will be arriving by car, will continue to use their car in their daily. This growth is the driving reason why we must fix our roads now!

Many of the new arrivals will be baby boomers, seeking to retiree in the sunshine the rest of us have enjoyed for many years. But keep in mind where many are coming from, and why they are coming here. They are not coming here to replicate the experiences they had in the past. They want our lifestyle - sun, fun, affordable living and freedom and ease of getting around town and the state.

The estimated 600K new residents moving to Hillsborough County by 2040 will not be heading to downtown Tampa. The urban core of Tampa is only estimated to grow about 20K by 2040.

Tuesday the Tribune reported that 2 downtown groups sent letters (coincidentally on the very same day) to our county commissioners in support of the Go Hillsborough plan.


Without a better transportation system, tourism in the Tampa area is likely to shrink from its current record levels and the region will lose its capacity to draw businesses to the urban core, according to two groups that promote economic development.

Both Visit Tampa Bay and the Tampa Downtown Partnership sent letters Dec. 18 to the Hillsborough County commission supporting Go Hillsborough, an initiative designed to raise millions of dollars for an improved transportation system.

They could not even wait until the results of the law enforcement investigation was released. We assume they don't care or what do they know that we don't?

A copy of the letter from the Downtown Partnership to Commissioner Victor Crist was conveniently included in taxpayer funded TBARTA's recent newsletter. Coordination and collusion among taxpayer funded entities and special interests are standard operating tactics for pushing sales tax hike referendums. This letter was dated December 15 not December 18th. We don't know if the Downtown Partnership sent Crist a separate lobbying letter than what the Tribune reported was sent to the rest of the commissioners. The letter can be found here and this statement is interesting.


We have attempted to position the TECO Line Streetcar's potential to be the starter system of a more regional rail system. 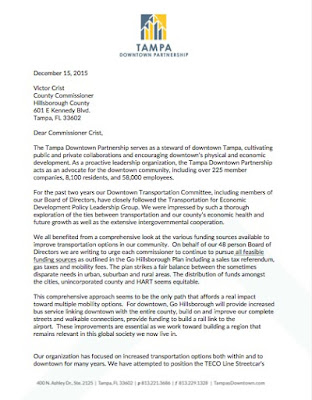 Regional rail is the real goal.

Ever hear much from the taxpayer funded entities being champions for funding our local roads? That has too much common sense because 98% of us use our roads everyday. Roads aren't sexy or a high cost shiny new object.

The Tribune even asked the County Attorney to weigh in on the legality of these 2 entities endorsing Go Hillsborough since they receive public funds.

The Tribune called to ask if I had an issue with these taxpayer funded entities supporting Go Hillsborough. I had to chuckle and ask the reporter whether she was surprised as I certainly was not.

The bigger issue I told the Tribune reporter that was unfortunately totally ignored is our State  electioneering laws are so broad a MAC truck could drive through them with no stiff penalties or consequences if violated. Our electioneering laws must be strengthened to clearly and concisely prevent taxpayer funded entities from using taxpayer funded resources and influence against the taxpayer. Real consequences and hefty penalties must be included if violations occur.

Where was the Tribune in 2010 and 2014 asking these questions? Every taxpayer funded entity in the Tampa Bay area came out supporting the 2010 Hillsborough and 2014 Pinellas sales tax hikes. We witnessed some taxpayer funded entities in 2010 spend (and waste) lots of taxpayer money attempting to sell voters to support the tax hike.

These 2 Tribune articles seem a bit schizophrenic. We are first told our state and the Tampa Bay area is growing in leaps and bounds with no end in sight and our tourism is booming because people and businesses want to move here and visit here. Then we are told 2 downtown groups support Go Hillsborough because without it our tourism will fall and businesses won't come here. Which is it?


“Every day Hillsborough County delays improvements to its transportation network, we fall farther behind our competitors,” the letter says.

…the county set a new bed tax record as the industry rebounded from the recession;

The new CEO Santiago Corrado was chief of staff to Mayors Iorio and Buckhorn, both big rail cheerleaders, before taking the position with Visit Tampa Bay. Buckhorn has ridden the coattails of the $1.3 million county funded Go Hillsborough sales tax hike proposal to fund his rail projects without the city of Tampa paying a dime for the effort. Corrado is also on the Board of the Downtown Partnership so it's no surprise that Corrado and his agency support Go Hillsborough.

The Tribune reports this from special interests Tampa Downtown Partnership


Businesses considering a move to Tampa want to see a transportation system in place to get their employees to work on time and to and from the downtown district, said Christine Burdick, president of the Tampa Downtown Partnership. Without offering those options, the county is at a disadvantage in drawing new businesses, she said.

We have multiple dispersed work centers, USF, Brandon, Westshore, MacDill and a very small downtown business district, smaller than Charlotte's. Go Hillsborough's costly rail plans to expand and transform the (bankrupted) streetcar into light rail and build a rail from the airport to downtown does nothing to relieve congestion for commuters going to work.


“We are acknowledging the amount of time and consideration and effort that went in to Go Hillsborough to date and the county commission needs to let the public have a say in this and take a step that will help,” Burdick said. “For corporate headquarters or other installations considering a move here, it is really important that we appear to be addressing our transportation issues.” (emphasis mine)

Do we want this county to "appear to be addressing our transportation issues" or actually doing something about it?

Yes - we all agree the status quo is unacceptable. The county commissioners have within their own powers the ability to start funding our roads and transportation needs now. It would be refreshing for once to hear the business community demand fiscal responsibility and due diligence from our county commissioners to appropriately fund our county's highest priorities that includes our roads and infrastructure first. Isn't that how they run their own businesses and personal lives?

As far as the old retread argument from 2010 to let the public have a say -  the voting public already did. They overwhelmingly voted NO in 2010 to another huge 30 year sales tax hike.

According to the Downtown Partnership website, before Burdick moved to Tampa to become President of the Downtown Partnership in 2002, she worked for Chicago's Mayor Daley. Google Mayor Daley….Daly loved spending taxpayer money as he went into office in 1989 with budget surpluses and left 22 years later leaving Chicago with massive structural deficits. The Chicago way is not a model to follow.

Again the Tribune admits the sales tax hike was baked into the Go Hillsborough campaign all along:


For nearly two years, the county staff has held meetings with the public to get input on the improvements people want to see in transportation. The initial concept was to fund improvements with a voter-approved increase of up to one cent on the dollar in the county sales tax.

The county wasted all this time and $1.3 million of taxpayer money enriching cronies to tell us the answer they had already decided.

Almost 2 years later and nothing has been done to fund our local roads that are literally crumbling and becoming safety hazards.

The taxpayers paid the hefty price and ended up with a law enforcement investigation.

But hold onto your wallets because the schizophrenic feeding frenzy for another huge 30 years sales tax hike has begun - again.

Posted by Sharon Calvert at 7:00 AM