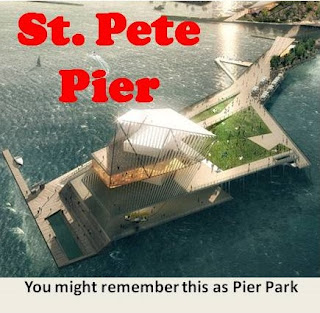 According to a Post in saintpetersblog by Janelle Irwin St. Pete’s Pier Park won’t be named Pier Park the City was notified of a trademark infringement in June.

The St. Joe Company owns the Rights to "Pier Park" as shown on their web site Pier Park® North — a joint venture with Casto and Strategic Retail Advisors (SRA), Pier Park® North is a vibrant shopping center located across from Pier Park Lifestyle Center in Panama City Beach. Featuring numerous national retailers, this shopping center opened in 2014 and is currently leasing the limited vacant space it has remaining.

The Kriseman administration reaction from Ben Kirby: "We never really called it Pier Park. Pier Park was the concept name, and we'll call it the St. Pete Pier going forward."

Actually, they did call it Pier Park for quite a while.

It's a pier with a park stuck on it. Obviously, the St. Joe Company doesn't see the irony in all of that and hinted at a law suit. After some significant foot dragging, and I suspect a lot of hand wringing the City opted for the name change.

Let's set up a committee of citizens to select a more appropriate name.

Kriseman could bring back Mike Connors to chair the committee, for members select a couple of Beach Drive restaurateurs, someone from the Chamber of Commerce, add Lisa Wheeler-Brown for a sure vote on the Mayor's choice, maybe a couple of the lemmings from the original selection committee and an actual citizen or two. Take suggestions from the public and let them think they are actually part of the name selection process.

Connors could write an eloquent rant on why the name St. Pete Pier is a throwback to the past and doesn't capture the grandeur of a park on a pier.

It worked before - right up to the final vote.