How the Crony Swamp Supports Massive Tax Hikes to Benefit Them

We posted here about the downtown Tampa cronies who are collaborating to control billions of taxpayer dollars. Five donors, all connected to Jeff Vinik, contributed $150K each to Vinik's transit tax hike PAC All for Transportation (AFT) to advance their collaborative agenda.

With $750K in the bank, where has Vinik's AFT PAC money been spent? Below are the expenditures reported by AFT through their latest campaign filing. 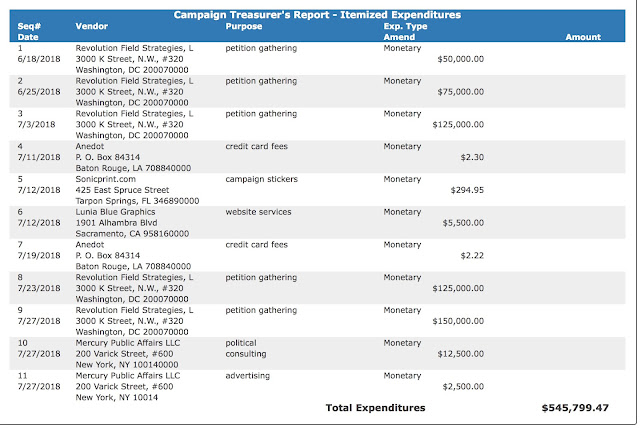 Another $15K was spent with Mercury PR firm. We understand Mercury is working with the campaign of Jane Castor who is running in Tampa's mayoral race. And who donated to Castor's campaign according to the SOE website? Sykes.
Mercury PR firm sound familiar? Go back to the Go Hillsborough (GH) debacle.

PR firms began salivating at the thought of getting a piece of a multi-million dollar tax hike advocacy campaign in 2015. The Mercury PR firm was pining for that business. According to this Tribune article in 2015:


“In our world — public affairs, strategic planning and advocacy — this is a big deal,” said Ana Cruz, a political consultant who works with Mercury, one of the firms that talked to the county about the campaign. “These big campaigns … we all want to be part of it. It’s what we do.”

Kieran Mahoney, Mercury’s chief executive officer, met with Merrill more than a year ago, on Aug. 20, 2014, less than a week after the county Transportation Policy Leadership Group agreed it needed to hire a firm with experience in transportation referendums. Merrill described his talk with Mahoney as a general description of the Go Hillsborough process.

It makes sense Mercury is working on Jane Castor's campaign because Ana Cruz is Jane Castor's partner. She is also the daughter of Democrat state rep Janet Cruz who originally filed to run for county commission but then jumped over to run against incumbent Republican state senator Dana Young. Maybe Cruz jumped ship out of the commission race because she knew Vinik's transit tax hike was a power grab by Tampa and usurps the power of county commissioners for 30 years.

A Tribune article in April 2016, right before the first public hearing on the Go Hillsborough debacle tax hike, reported a poll taken by Mercury:

The poll, conducted by the Tampa-based Mercury firm and financed by unidentified business interests, indicates the strongest support yet for the proposed tax. A total of 66 percent of those surveyed said they would either “definitely” or “probably” vote for the tax.

Hagan said the survey was financed by a group of businessmen in different industries who did not want to be identified. Asked if the group would ever come out of the shadows, Hagan said that was a “distinct possibility.”

We knew then and we know today who those unidentified business interests sitting in the shadows were who funded the poll.

Which confirms just how greedy the Vinik tax hike cartel are.

Mercury wanted the lucrative advocacy campaign for the crony GH tax hike so bad they did a poll funded by the very cronies who would dump millions into the advocacy campaign to benefit them all. Of course Mercury got the polling answer to help get them the campaign work they wanted.


Hagan said that by design, the ballot question does not mention light rail — a mode of transportation that opponents focused on and that was highly unpopular among suburban voters.

Sound familiar? That was a lie then and it's a lie now.
The only reason Vinik demands a 30 year 14% massive transit tax hike is to fund costly rail in Tampa and fund all of it. The cronies are not planning to go to the Feds for funding because the cost is too high and the ridership too low to qualify for federal money. Vinik and his downtown Tampa allies plan to fund the ENTIRE cost of the costly trains in Tampa with YOUR COUNTY TAX DOLLARS -  most of which will come from unincorporated Hillsborough County.

Of course, Kieran Mahoney, the CEO of Mercury PR firm, donates to Tax Hike Hagan because Hagan has not seen a proposed sales tax hike in over a decade that he has not supported.
Special interests keep circling money thru PAC's, PR firms and campaign coffers to push massive tax hikes that benefit them.

Expect Vinik and his special interests allies to dump $5-10 million into Mercury and perhaps some other PR firms over the next 90 days. With the Vinik owned media megaphone, they will drown out everything and everyone as if nothing else exists but their own greedy egregious massive tax hike.

It is a big circle of money!

And a big SWAMP! 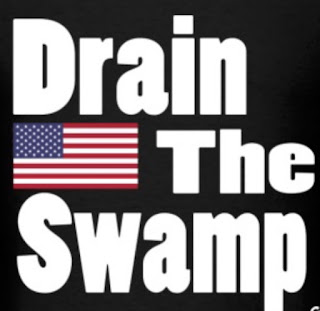 Posted by Sharon Calvert at 5:07 PM