Clueless or intentional? Senator Bill Nelson, in a close campaign for re-election against Governor Rick Scott, sent a fundraising email for hurricane Michael relief that directed users to the ActBlue web site, a Democrat fundraising PAC, which could capture donor's email addresses.

Sen. Bill Nelson (D., Fla.) on Wednesday sent out an email encouraging people to donate money for hurricane disaster relief with a list of nonprofit groups that provide aid, but he did not disclose that the links for each group direct users to the website of ActBlue, an organization that helps Democrats raise money and saves donor emails for future fundraising efforts.

Within hours of the storm hitting, Nelson sent out an email with a list of nonprofit organizations, which he said are "vital resources for people who need help." The nonprofits include American Red Cross, Big Bend Homeless Coalition, Florida Disaster Fund, and Team Rubicon, among others.

Each organization has a link that sends users to a page on ActBlue's website asking people to donate to hurricane relief efforts.

He also tweeted out the ActBlue link. 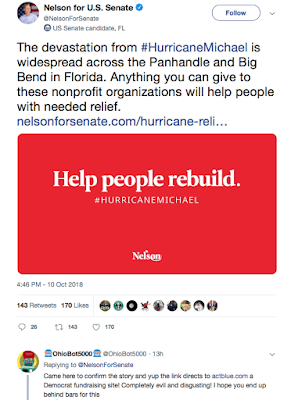 The URL redirects to https://secure.actblue.com/donate/bn-hurricanemichael 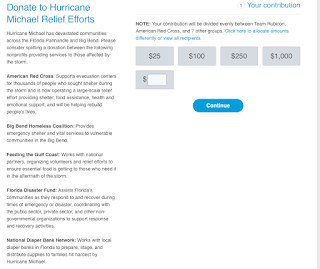 "ActBlue is a nonprofit, building fundraising technology for the left", according their website.

Quite a tasteless act from Nelson, directing users to a left web site under the guise of hurricane relief, while many of our fellow Floridians are devastated by hurricane Michael, literally digging themselves out from the horrific storm. He decides to use a Democratic activist site where contributor's email addresses could be harvested for more political fundraising, as he is in the battle to save his political life.

Nelson had recently sent emails, including those in the path of hurricane Michael as the storm was bearing down, into sending him money.

“And with votes already being cast, it couldn’t be more important that we keep our ads live.”

“We can’t win without your immediate donation, friends.”

“We just got some unbelievable news: A group of donors is DOUBLING ALL GIFTS for one day only to help Democrats take back the Senate!”

Never mind the consequences and horrific damage and impact to Floridians from hurricane Michael.

Nelson would never let a disaster as an opportunity to fundraise go to waste.
Posted by EyeOn TampaBay at 1:06 PM