The All for Transportation (AFT) $23B Transit Tax Hike is now a three ring circus.
Blame for this circus is with the Tampa Centric 5 commissioners - Kimberly Overman, Harry Cohen, Mariella Smith, Pat Kemp and Gwen Myers - who put the misleading and deceptive tax hike on the ballot.
The tainted referendum remains on the ballot due to the County's appeal, even though local media and even the SOE were telling voters the transit tax was not valid.
The County's $700K contract with engineering firm HNTB to launch and manage a taxpayer funded campaign associated with the transit tax may also be polluting the transit tax hike.
We warned about Hillsborough County using taxpayer money to fund a campaign about the AFT transit tax hike here and here.
Attempting to hide behind engineering firm HNTB for PR, marketing and campaign work associated with a tax hike referendum is not ethical. It also may have more serious issues.
Florida Statute 106.113 states (emphasis mine):

With the exception of the prohibitions specified in subsection (2), this section does not preclude an elected official of the local government from expressing an opinion on any issue at any time.

Elected officials can always express their opinions or advocate on an issue/referendum that is put before voters.

Local bureaucrats or those hired from the outside to represent the local government cannot do that. There are restrictions because taxpayer money cannot be used for electioneering which is an abusive use of taxpayer dollars.

At the June 2nd BOCC meeting, when County staff recommended hiring HNTB, they presented the work order for hiring HNTB.

HNTB's work order is campaign tactics and strategies. The work includes targeting certain demographics, using key messaging, using social media, creating a website, providing talking points to local media, answering questions from the public and "monitoring" other organizations.
On the taxpayer dime, the County hired high cost engineering firm HNTB to not only do PR and marketing for the $23B transit tax, but to "monitor" what other organizations are saying and doing. Is HNTB using taxpayer dollars to monitor those who oppose the transit tax?
Hiring high cost engineering firms to create websites and manage taxpayer funded campaigns for a County's transit tax hike referendum is not normal.
Reality is there is nothing "normal" about the deceptive and misleading $23B transit tax hike, including HNTB's taxpayer funded campaign.
HNTB's transit tax campaign website lacks substantive information about what the transit tax will actually fund. It also includes misleading information.

However, an April 19, 2022 memo to the county commissioners about what the $23B transit tax will fund from Asst. County Administrator for Public Works John Lyons, paints a very different picture.

Directly relating to the tax hike, Lyons April 19th memo states the "system would be resurfaced about every 30 years."

Lyons memo also told the commissioners the $23B transit tax will build out the Greenways Master Plan for Trails at an estimated cost of $273M. Funding Trails is not found in Florida Statute 212.055 Section 1 that governs what the proceeds of local Transportation Sales surtaxes can be spent on.

Lyons also told the commissioners only 25-30 miles of new road capacity "could" be funded with the massive take hike - over 30 years.

Lyons April 19 memo is not found on HNTB's transit tax campaign website. But it includes important information that voters should know and have access to before they vote.

It is reasonable to assume since an engineering firm is being paid $700K to manage the campaign website, they would ensure all responses to questions would be direct, accurate and factual.

The response we received via email included a link directing us to an outdated 20 year transportation plan created by another organization, the Hillsborough County Transportation Planning Organization (TPO).

That is unacceptable. A transportation engineering firm being paid $700K of taxpayer money should be able to tell the public what congestion relief benefits a 30 year $23B tax hike will provide. Sending the public to an inaccurate, stale and outdated TPO 20 year plan is outrageous.

Why would the public just now be told the 30 year $23B AFT transit tax is funding an outdated TPO 20 year plan? Where's the rest of the money going?

The public was never told this information at the April 20, 2022 public hearing.

HNTB has no reference to the TPO's 20 year plan on their transit tax campaign website.

The County/HNTB is not providing accurate, fair and impartial information on the transit tax campaign website. 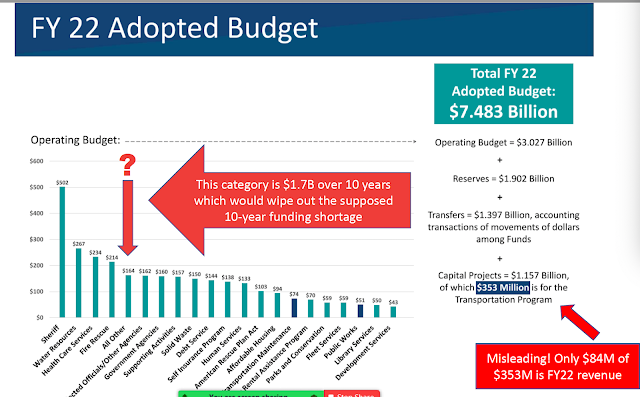 HNTB's transit tax campaign website misleads the public with charts that use 6 years of revenues to cover 10 years of needs. That OVERSTATES the funding shortfall. That is basic math. 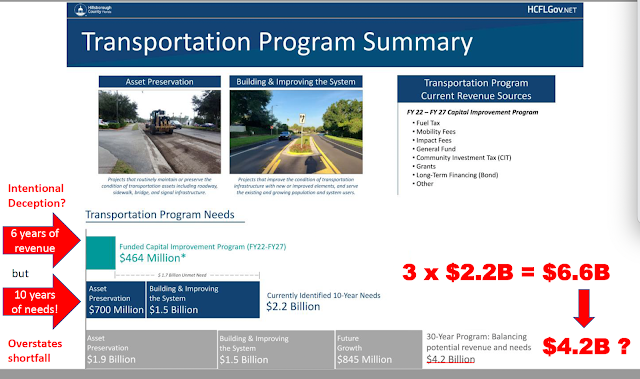 Excluding Lyons memo with important information from the campaign website is unacceptable.

Directing the public to an outdated, inaccurate and not factual 20 year LRTP from the TPO is unacceptable....especially when a transportation engineering firm is managing the campaign.

Misleading the public by using 6 years of revenue against 10 years of needs to overstate the funding shortfall is unacceptable. That is not impartial, that is biased.

The County knew the All for Transportation PAC had millions from their wealthy special interests donors to fund another AFT transit tax campaign....just as they did in 2018.

That was not enough for the Tampa Centric 5 commissioners. They forced taxpayers to pay for another campaign and hired HNTB.

Statute 106.113 requires that when taxpayer funds are used to communicate with the public about a referendum issue, the information must be factual, accurate, fair and unbiased.

Or make the $23B AFT transit take hike an even costlier and bigger three ring circus?

Posted by Sharon Calvert at 7:36 PM