Orange County Did So Why Didn't Hillsborough County Put a Clean Transit Tax Hike On the 2022 Ballot?

Orange County appears to have put a much cleaner, more clear and more accurate, according to what Florida State law (FS 212.055) allows, in their transportation sales surtax ballot language. It simply asks voters to vote for or against a 1%, 20 year sales surtax dedicated to transportation and transit improvement for uses authorized by law....as approved by the Board of County Commissioners.

The ballot summary language is the ONLY information EVERY voter is guaranteed to see or read before voting.
Hillsborough County's transit tax ballot language fails to tell voters the tax can be expended on any or all transportation uses as authorized by State law.
Hillsborough County also fails to tell voters only the board of county commissioners, including all future commission boards, have the authority to expend the tax proceeds on uses authorized by State law.
Therefore, voters are led to believe the uses the AFT transit tax will fund in the ballot summary language are set in stone for the 30 year life of the tax.
Lots of things change over 30 years, including many different commission boards, different County staff, changing County priorities, technological changes, innovation, growth and where that occurs, etc.
Interestingly, in the recent County's appeal filing requesting the stay remain in place, after the Circuit Court's ruling that threw AFT off the ballot as misleading and unlawful, Hillsborough County's outside attorney admitted (emphasis mine):

the Surtax Ordinance is an ordinance adopted by the County Commission, not a charter provision adopted by voters

Because it is subject to amendment, the uses of proceeds it contemplates can change at any time, so long as they are consistent with section 212.055(1)(d).

The Surtax Ordinance itself contemplates that the County Commission will direct surtax proceeds to different uses than those currently stated.

There is nothing in the ballot summary language, the only thing every voter is guaranteed to read before voting, that tells voters this.

Apparently, the County expects voters to figure out for themselves the funding uses included in the ballot summary language are just gobblygook that can be changed by a simple 4-3 vote by the commission board.

The Plaintiff's response here to the County's appeal wanting to keep the stay in place includes (emphasis mine):

the County failed to identify so much as one specific legal error in the summary judgment order—a failure it repeats in its motion in this Court.

Yet, despite the absence of any reason to think the County’s appeal will succeed, the trial court dutifully examined

additional written arguments, additional exhibits, and additional oral arguments during a second two-hour hearing. The County did not deny it can put a transportation surtax back on the ballot in the 2024 general election. It failed to offer any reason—a cognizable interest in its ballot language or a transportation need it will be unable to meet, for example—to think it will be injured, let alone irreparably so, without a stay pending appeal
And it all but conceded that if the surtax is approved and becomes effective, a refund will not be available to make taxpayers whole after this Court renders a decision.

Orange County's Ordinance 22-14 that placed their transportation sales surtax on the ballot is much cleaner. It appears they use more clear and more accurate funding language according to what Florida State law (FS 212.055) allows.

Compare that to all the mandated appropriations and regulatory gobblygook the Tampa Centric 5 commissioners included in their Ordinance 22-9.  The AFT transit tax mandates and regulations go on for pages. 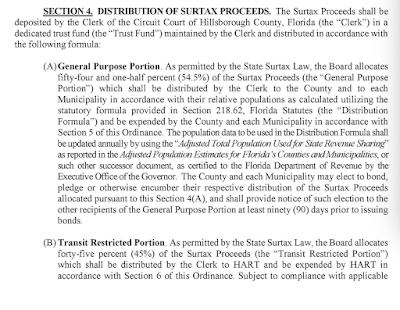 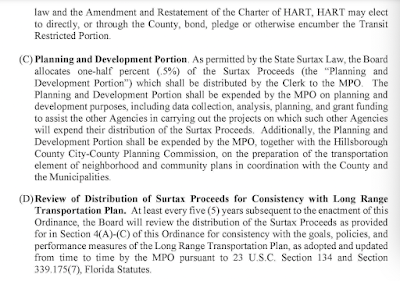 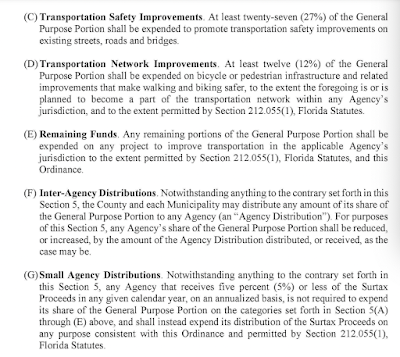 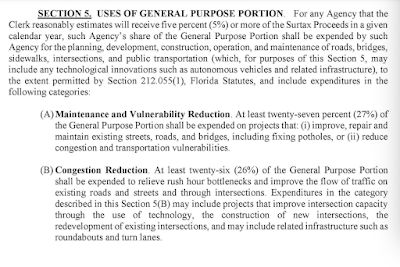 Remember, the County's outside attorney has already admitted all these mandated spending appropriations can change with a simple majority vote by the county commission board.

With a 4-3 simply majority vote, the county commission board can change the AFT tax spending allocations, including handing HART transit agency 75% of the total $23B (about $17.25B) tax proceeds - exactly like was on the rail tax overwhelmingly defeated in 2010.

Why did the Tampa Centric 5 commissioners use such extraneous gobblygook language in their Ordinance and ballot language?

And why in the world did the Tampa Centric 5 mandate a half percent of the total $23B tax, over a billion dollars, must go to the Hillsborough County Transportation Planning Organization (TPO)?

Go back in history.

In 2018 the AFT transit activists decided to use an outdated 20 year Long Range Transportation Plan (LRTP from the TPO as the foundation for AFT's mandated spending appropriations and regulatory gobblygook.

AFT's Chair Tyler Hudson admitted AFT used an outdated 20 year plan, with old and flawed data going back to 2012 or older, to put a 30 year transit tax on the 2018 ballot.

Let that sink in....AFT put a massive 30 year transit tax hike on the ballot to fund an old and outdated 20 year TPO transportation plan. AFT knew HART was fiscally failing then and needs a bailout.

But the TPO's Director Beth Alden has clearly stated that LRTP's are not implementation plans. Transportation funding described in the TPO's LRTP is just a "wish list" that have little to no association with reality. LRTP's are used to look at various scenarios based on different funding levels over 20 years.

Let that sink in again....AFT put a 30 year transit tax on the ballot to fund an outdated "fairy dust and unicorns" 20 year TPO funding plan full of irrational assumptions and inconsistencies. LRTP's are NOT implementation plans.

No wonder AFT mandated 1% of the total transit tax must go to the TPO in 2018. AFT, a political committee, used the taxpayer funded TPO as their sidekick.

But LRTP's are not real transportation funding plans.

Hillsborough County's TPO has been pushing rail projects for decades. Rail projects have remained in the LRTP's even after the 2010 rail tax was defeated. The Hillsborough TPO has spent more time pushing rail and transit boondoggles than focusing on fixing our roads, highways and interstates.

In fact members of the 14 member TPO Board, that includes the Tampa Centric 5 commissioners, want to tear down interstates and prohibit the funding of interstates in Hillsborough County. (More to come about this issue.)

A huge issue is the TPO is a totally separate organization.

The TPO has no authority to tell the County how they spend their local tax dollars. The County can spend its transportation sales tax dollars however the county commission deems appropriate under State law.

AFT's 2018 transit tax hike, ruled illegal and unlawful, created a $600M refund debacle that has yet to be resolved.

But the Tampa Centric 5 commissioners appears to have learned little to nothing from the 2018 AFT mess. They decided to use the same outdated spending mandates and regulatory gobblygook AFT used in 2018.

Then these 5 commissioners took it a step further than 2018.

The Tampa Centric 5 have attempted to codify the TPO's LRTP in Ordinance 22-9 that put the $23B AFT transit tax back on the ballot.

No wonder these 5 commissioners mandate taxpayers hand the TPO a boatload of new tax dollars. The TPO bureaucracy will explode in size so they can create bigger and more costly "fairy dust and unicorn" LRTP's, fund more studies that go nowhere and enrich more consultants - all at taxpayer expense.

The question remains, however, whether the County can legally do this and/or whether this could be another legal issue associated with the 2022 AFT tax hike three ring circus.

When TPO Director Beth Alden spoke at Cafe Con Tampa over the summer, we asked her on what authority can the County codify the TPO's LRTP.  She did not provide an answer.

Orange County was able to put a clean, more clear and more accurate Transportation Sales surtax on their ballot....and ballot summary language that appears to comply with State law.

Even after the 2018 big legal mess, the Tampa Centric 5 county commissioners - Overman, Cohen, Smith, Kemp, Myers intentionally did not do that in Hillsborough County.

They decided to use misleading poll tested ballot language to manipulate voters to vote for their massive $23B transit tax.

Keep Voting NO and defeat the AFT transit tax three ring circus at the ballot box!