Tampa Centric 5 Turns AFT Transit Tax into Three Ring Circus: Just Vote NO and Defeat It At the Ballot Box The Tampa Centric 5 Hillsborough County Commissioners (Overman, Cohen, Smith, Myers, Kemp) are responsible for putting the deceptive $23 Billion All for Transportation (AFT) transit tax on the November ballot. They are responsible and the reason why a legal challenge was filed against the AFT tax hike.

After that ruling, the voting public was bombarded for days with local media headlines shouting the AFT transit tax was "nullified", "removed", "eliminated", "thrown off" the ballot.

Judge Moe heard oral arguments on October 27th from both sides regarding Plaintiff's request to lift the automatic stay and she did.

On Friday, October 28th at 7am, the Hillsborough County SOE had placed signs at all the early voting locations and in the voting booths informing voters the transit tax had been removed from the ballot.

Then Friday afternoon, the stay was temporarily put back in place by the 2nd District Court of Appeals and the SOE signs were removed leaving voters totally confused.

Voters have been repeatedly told, by the media and by the SOE, that the transit tax has been removed from the ballot.

The AFT transit tax referendum is corrupted beyond repair. The genie is out of the bottle and cannot be put back in.

While the AFT tax hike ballot language was ruled unlawful, there may be other issues with the $23B AFT transit tax.

First, the AFT transit tax ballot is tainted. Voters have been repeatedly told the tax hike referendum was removed. Anyone who opposed or supported the tax hike may have simply not voted on the referendum because they were told, even by the SOE, it had been removed from the ballot.

Confusion now reigns over the AFT tax hike. The integrity of the transit tax hike referendum election is in jeopardy.

Second, as we posted here, the required Financial Impact Statement (FIS) was NOT included in the ballot language as required by Section 8.05 of the County Charter. The missing FIS violates the County Charter. We have still not gotten a satisfactory answer from the County or SOE for why the FIS was excluded. Local media have been told about this issue yet they have refused to ask questions or report about it.

Third, Hillsborough County directs the voting public to Ordinance 22-9 that specifies how the AFT transit funds are to be appropriated for 30 years.

But the County neglects to tell voters that per Florida Statute 212.055 the commissioners can apply the proceeds from the sales surtax to as many or as few of the uses Statute 212.055 enumerates in "whatever combination the county commission deems appropriate".

Statute 212.055 does not mention the transportation sales surtax can fund "Trails". Yet the April 19, 2022 memo from Public Works Asst. County Administrator John Lyons to the County Commissioners states that at a minimum:

The current proposed plan builds out the Greenways Master Plan for Trails at an estimated cost of $273M.

Additional funding would allow for expansion beyond the Master Plan.

The only place the terminology "build and widen roads" is used is in AFT's ballot summary language, the only thing every voter is guaranteed to read, Those words are the first item listed on the ballot language the tax hike will fund.

Using those poll tested words as the first item to be funded by the AFT tax, the County implies to voters that building and widening roads is the highest funding priority of the $23B tax hike.

Statute 212.055 does not mention "make walking and biking safer". Those terms found in the ballot summary language can mean REMOVING auto lanes for bike paths and/or transit. Voters are not told that.

Fourth, Ordinance 22-9 putting the $23B transit tax on the ballot states:

the Board desires to enact this Ordinance to provide for the levy of, and referendum on, a one percent (1%) transportation system sales surtax (the "Transportation Surtax") in accordance with the State Surtax Law AND as provided herein, to provide a method of funding such transportation needs

All proceeds from the Transportation Surtax....shall be expended only as permitted by AND in accordance with this Ordinance AND the State Surtax Law

A County Ordinance cannot supersede State law. Stating the AFT tax hike proceeds must be used according to Ordinance 22-9 AND State law appears to be conflicting.
Fifth, the County neglects to tell voters the funding allocations currently in Ordinance 22-9 can be changed by a future commission board.
A serious question is whether this county commission board can legally dictate how future commission and municipality Boards, future HART Boards, future TPO Boards spend their Transportation Surtax proceeds over 30 long years.
Sixth, the deceptive AFT ballot language was intentionally used for political gain. As we reported here, HART's lawyer David Smith told us.
At the March 10, 2022 BOCC Transportation Workshop, questions about the proposed AFT transit tax were raised. Questions were directed by County staff to the county commissioners whether the ballot question should be generic or "tailored to specific projects" and whether "a percentage split of uses between transit and non-transit projects be addressed".
The Tampa Centric 5 commissioners willfully decided to put the flawed $23B AFT transit tax hike on the ballot with the deceptive poll tested ballot language.
Their poor judgment, incompetence and willful neglect may have set the County up for more legal challenges.
The Tampa Centric commissioners have turned the $23B AFT transit tax into a three ring circus a week before the election.
They have no one to blame but themselves for creating another big AFT transit tax hike mess! 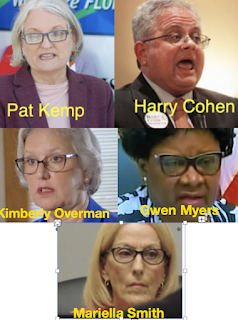 Posted by Sharon Calvert at 8:56 AM