Afternoon on the Trolley and Riverwalk

It was a beautiful Spring day in Tampa, so we headed down to Ybor City for some lunch at the Tampa Bay Brewing Company.  Ran into an old friend, Andy, and caught it a bit. Then we went for a ride on the Teco Trolley to see what it's all about.

We picked up the trolley at the Tampa Bay Federal Credit Union station, outside Centro Ybor.  We could see the trolley off in the distance, but it was not moving.  We waited about 10 minutes, then if finally came, right on time.  I guess they don't want to get ahead of schedule.  We bought a $5 day pass for each of us. 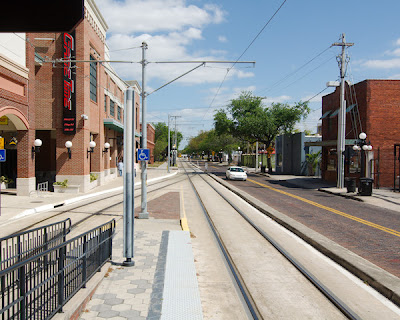 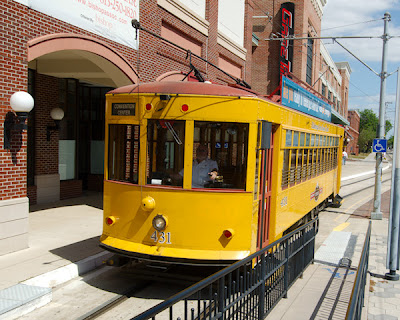 There were a total of 6 of us that got on at Centro Ybor. 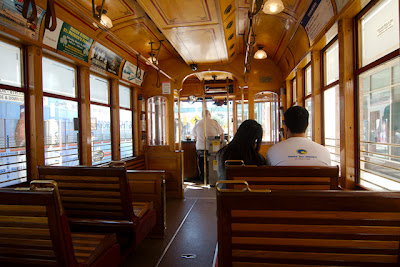 More trolleys!... This is the HART maintenance station for the trolleys. 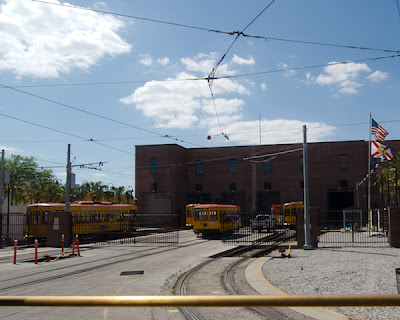 Some scenery from the Port of Tampa. 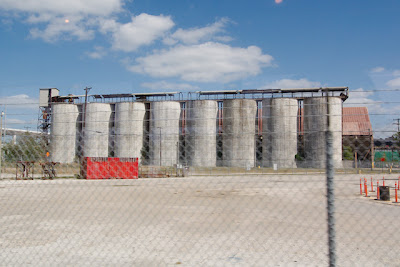 3 cruise ships were in port, getting ready to sail. 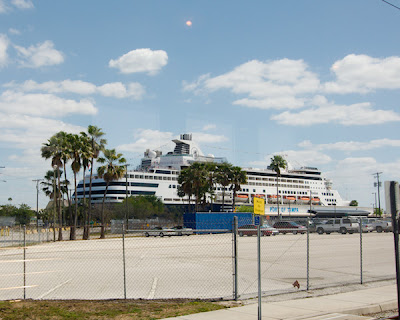 Some space for lease, in case you want to open a business. 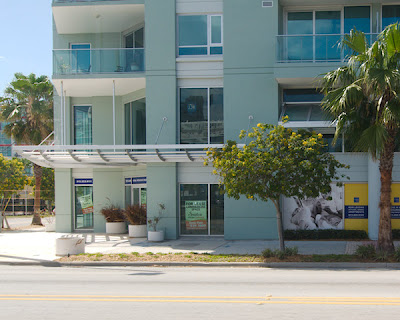 The Florida Aquarium is located conveniently off the trolley.  Wow, a great success for Transit Oriented Development?  No.  The Aquarium was built before the trolley. 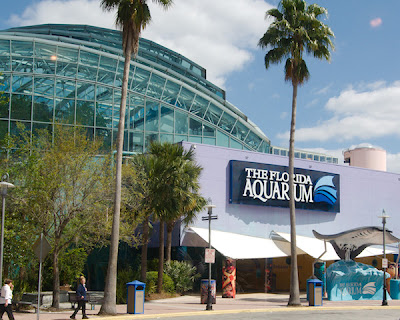 The Cruise Terminal is also located conveniently off the trolley route.  We did not see any cruisers on the trolley. 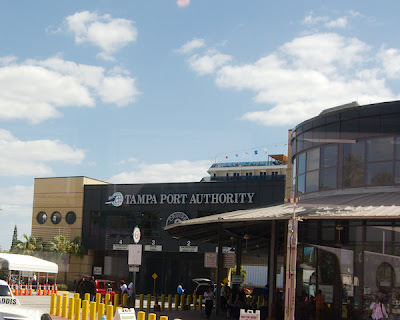 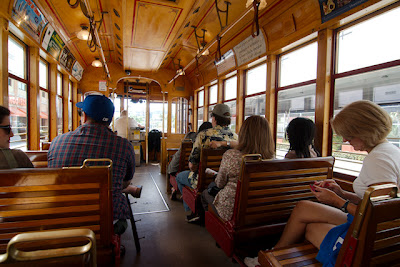 We got off at Channelside at the Tampa Tribune station, and we walked.  To the Riverwalk.

We took some pictures of Harbor Island. 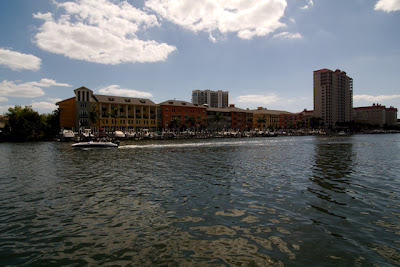 We took some pictures of of the river. 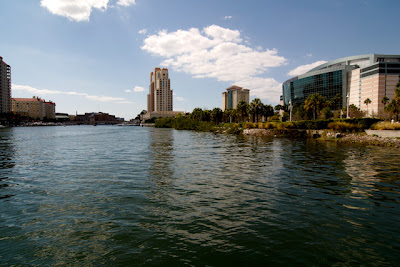 The Columbia Restaurant at the Tampa History Museum.  We stopped by later for some dessert and a beverage.  It was good, as we've enjoyed it in the past, but good thing we were not in a rush. 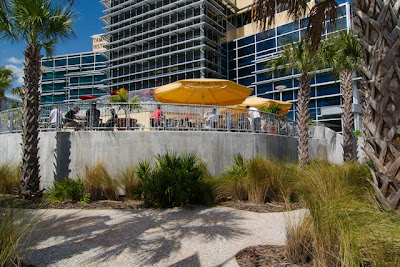 A shot of the Harbor Island bridge. 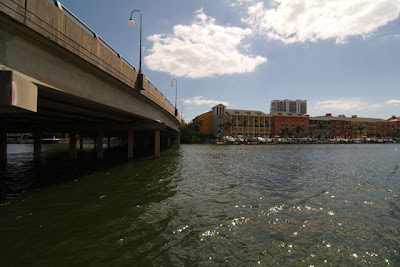 A picture of Cotanchobee Park taken from the dock outside the history center. 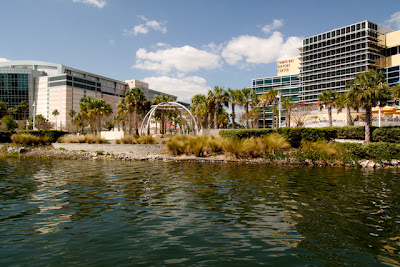 Contanchobee Park.  Lots of folks had their doggies out. 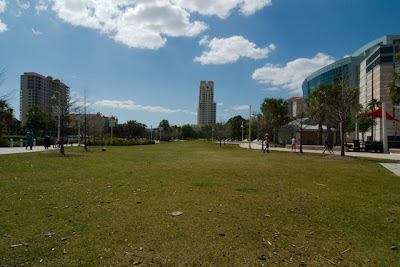 Fallen heroes memorial for firefighters and law enforcement killed in the line of duty. 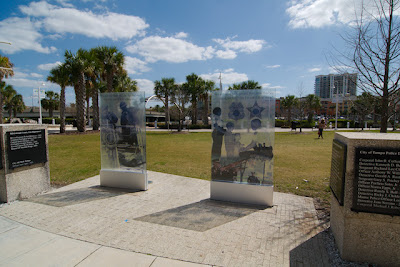 Cotanchobee Park from the East side. 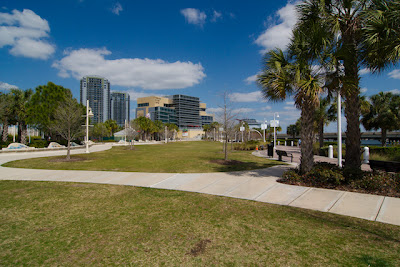 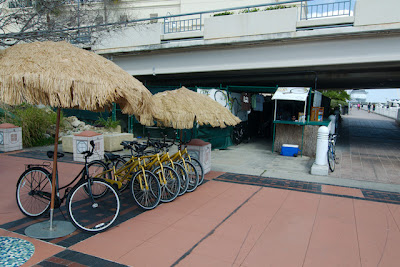 From the Kennedy Bridge, University of Tampa, and a boat with more people than we saw on the trolley today. 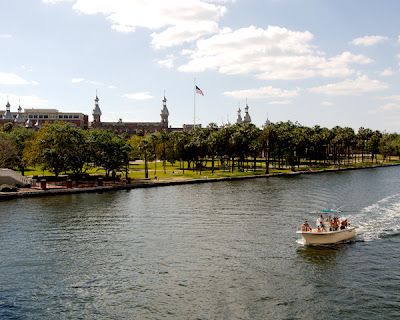 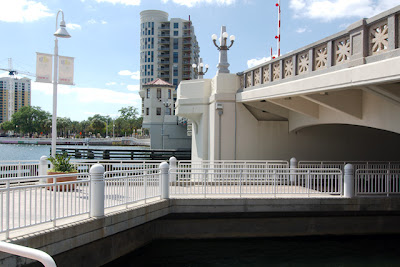 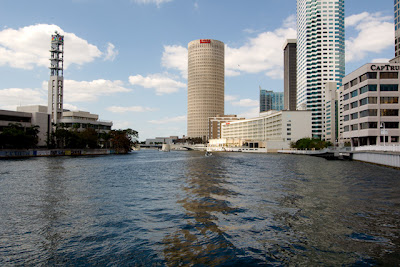 Another view of University of Tampa. 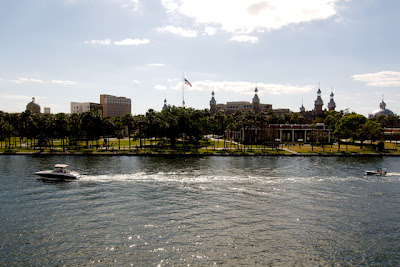 We have cool, modern technology in the trolleys... or is quaint back in style? 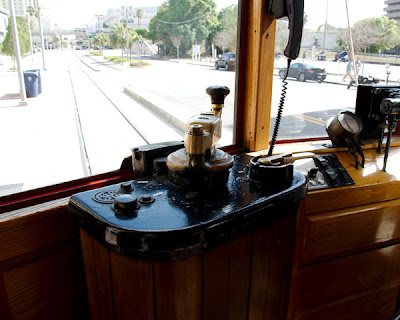 Here comes the trolley.  Right on time.  Then we sat for 5 minutes.  Don't want to get ahead of schedule. 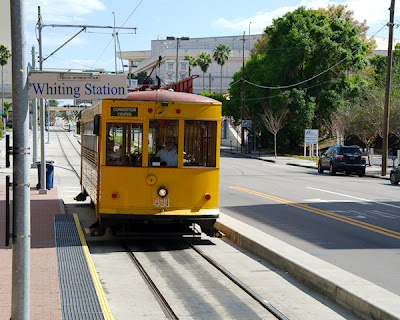 At another stop, a couple was having some trouble with the ticket machine.  The trolley driver told them to push some button, waited another 15 seconds or so, then took off without them.  I guess they waited another 20 minutes.

If you're early you wait, if you're late, they leave.

Don't want to get behind schedule. 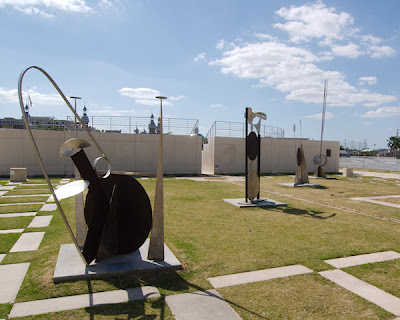 We wanted to catch the trolley heading back to Ybor at Channelside, but we missed it by a couple of minutes.  So rather than wait another 18 minutes, we walked up to the next Aquarium stop... and we waited their for the trolley about 8 minutes.

Lots of cars went by. 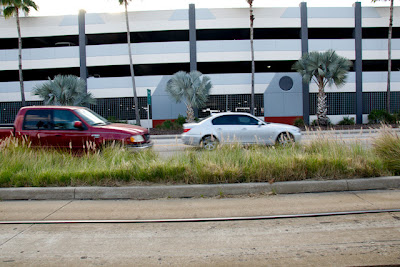 Coming back into Ybor City on the trolley. 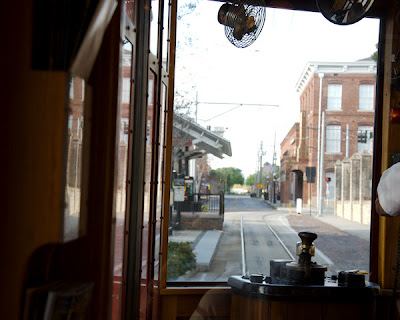 All in all, it was a very nice day, with beautiful weather.  We enjoyed our walk along the Riverwalk.

Just don't be in a rush.  And that was OK today.

Posted by EyeOn TampaBay at 8:48 PM