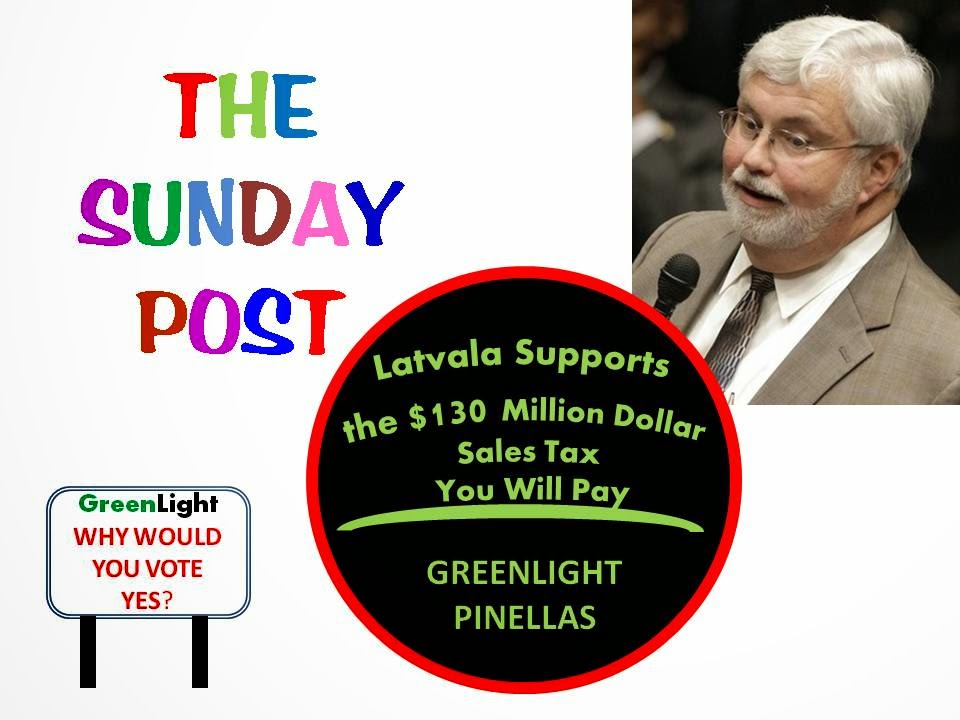 Latvala, who some view as the Golden Boy power broker of Pinellas County politics, separated himself from the Pinellas County Republicans who have announced their opposition to the GreenLight Sales Tax Referendum.

“I like the idea of tourists paying for a transportation system that they use,” Latvala said.

I am sure our visitors will be thrilled to know the Senator doesn't mind reaching into their pockets.

The good Senator waxes on about how GreenLight could help keep the Rays, and how it might have been a benefit during the recent Republican Convention.

Never mind the fact that GreenLight provides no link to the airport, no link to Tampa, no link to any convention center and will most likely not be completed before the Rays are long gone.

Latvala is a pragmatic politician. It would appear to me that the Senator has spent more time reading the campaign finance reports and looking at all of those high end contributors than he has reading the Ordinance that he endorsed.

Jack, do you really think we should put a law in place (Ordinance 13- 34) and activate an Interlocal agreement that results in the highest sales tax in Florida, supports bonding and financing that could run for 90 years, to build a train that does not even serve the 2% of Pinellas County residents that actually used public transportation?

Check out  The GreenLight Quid Pro Quo - Or Your Tax Dollars Being Bought.

Most of the local politicians that have endorsed GreenLight would quite likely have a different view if they had to pass this referendum in their jurisdiction and be responsible for it.

Don't be mislead, get the facts and make an informed decision when you vote.

Watch My Video Green Light - It's a Bad Law before you vote.
E-mail Doc at: dr.webb@verizon.net. Or send me a Facebook (Gene Webb) Friend request. Please comment below, and be sure to share on Facebook and Twitter.
Disclosures: Contributor to No Tax for Tracks
Posted by Gene Webb at 5:00 AM