All For Transportation is MIA on I-275 Expansion

Local media gave AFT spokespersons gobs of free earned media to shout out their message we must spend more money on transportation in Hillsborough County.

AFT spent $4 million telling Hillsborough County voters that traffic congestion in the county was in dire straights. Their massive campaign emphasized "road improvements" to relieve congestion to get you home for dinner quicker.

So where in the world is All for Transportation (AFT) on FDOT's I-275 planned interstate expansion and safety improvement projects?

Does AFT support FDOT's plans to add much needed capacity and safety improvements to I-275 in Hillsborough County?

We bet there are lots of Lightning fans who use I-275 to get to Lightning games. Does AFT's largest donor Jeff Vinik support the I-275 expansion projects.

Why is AFT MIA on these interstate expansion projects so critical to Hillsborough County and the entire Tampa Bay region?

Why do we only hear "crickets" from AFT about these projects?

Especially when AFT's public narrative in their $4 million marketing campaign last year was that improving roads is the highest priority in Hillsborough County.

AFT told us our roads are jammed and the time to act is NOW. 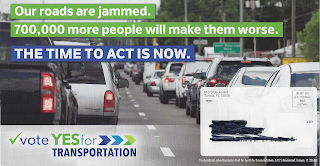 Road improvements were reflected as the highest priority in AFT's ballot summary language.

Now FDOT plans to spend hundreds of millions of dollars of state/federal gas taxes we already pay, not new taxes, to improve our interstates and malfunction junction in Hillsborough County. Their expansion plans north of downtown is being done within the property footprint FDOT owns.

There is an important Hillsborough MPO meeting this evening where the MPO Board will decide to keep the I-275 expansion projects in their 5 year Transportation Improvement Plan.

Will AFT spokespersons - Tyler Hudson, Brian Willis, Kevin Thurman, Christina Barker - who were so vocal last year about road improvements and spending more money on transportation, show up at this important meeting?

If so, will they speak in support of FDOT's I-275 interstate expansion?

The Sunshine Citizens activists who want to tear down I-275, oppose the I-275 expansion, new roads and road widening are expected to stack the MPO meeting.

But Sunshine Citizens, who are transit ideologues, no longer have the moral high ground they once thought they claimed. They are now seen as uncompromising and irrational.

And right now AFT's own narrative of the dire need to spend more money on improving roads in Hillsborough County is being tested.

But will AFT stand up for their own narrative?

Either AFT sympathizes with the over 250K people who "jam" I-275 everyday and supports the vast majority who want added capacity on I-275 or they don't.

Because after AFT spent $4 million last year lecturing us to spend more money on transportation and road improvements were the highest priority...

AFT's current silence on FDOT's planned I-275 expansion projects is deafening.
Posted by Sharon Calvert at 9:27 AM