Tell the Hillsborough MPO: We Want Our Interstates Expanded Not Torn Down

I-275 is used by over 250K people everyday and serves as a major evacuation route in Tampa Bay.


The Transportation Management Area (TMA) leadership group, that includes the MPO's of Hillsborough, Pinellas and Pasco counties, include the interstate expansion projects (including the northern corridor of I-275) as top Tampa Bay regional priorities for the TMA. 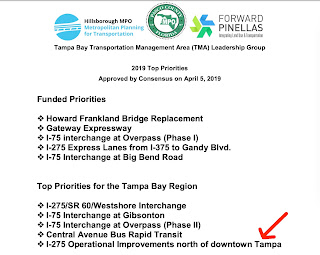 At the TMA meeting the Eye attended yesterday, this was stated by each MPO:

Pinellas County commissioner Janet Long even asked Alden, who was sitting next to countywide commissioners Pat Kemp and Kimberly Overman, to clarify the I-275 projects were in Hillsborough County's Transportation Improvement Plan (that will be voted on Tuesday June 11) and Alden stated yes.

That sensible position by the region's MPO's helps ensure that Hillsborough, Pinellas and Pasco counties will receive its "fair share" of FDOT funding for all interstate expansion and improvements projects much needed in the growing Tampa Bay region.

So this Tampa Bay Times article is no surprise to most everyone:


A survey of about 400 Hillsborough residents shows strong support for widening Interstate 275 from downtown to Bearss Avenue and adding a lane on the flyover ramp to Interstate 4.

Approval from 84 percent of those surveyed is “exceptionally high and consistent, signaling that there is a clear mandate for steps to be taken,” according to a presentation from Paul Fallon of Florida Opinion Research, which conducted the survey. It has an estimated margin of error of about 5 percent.

Except the urbanists who want to tear down our interstates.

We posted here about Sunshine Citizens, a transit advocacy group, who wants to tear down I-275 and replace it with a costly, dangerous street level light rail. They conflate the AFT local sales tax with interstate improvements funded for by state/federal gas taxes we already pay for.

After the above Times article was published, Sunshine Citizens immediately took to their Facebook with a scorched earth "Call for Action". They are "demanding" the Hillsborough MPO stop all further interstate expansion work."

Sunshine Citizens is very misinformed if they think the MPO Board only represents them in a county of 1.4 million people. And Hillsborough County is not an island unto itself who can just disregard their neighbors in Pinellas or Pasco.


On May 22 at 2:42pm, Michelle Cookson, a leader of the Sunshine Citizens transit advocacy group, posted this comment on their Facebook page. 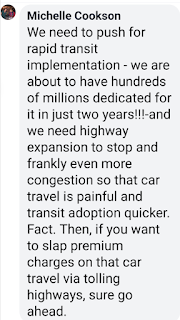 Cookson wants more congestion created to make car travel painful. She wants to intentionally make the lives of the 98% of us who use our roads everyday and the lives of the over 250K people who use I-275 everyday miserable.

The Eye has spoken to people throughout the Tampa Bay area and NO ONE supports tearing down any part of I-275. With population expected to grow by 600K in Hillsborough and by a million or more in the Tampa Bay area over the next 25-30 years, they all want our interstates expanded.

And the poll above reflects that as a vast majority wants I-275 to be expanded and capacity added.

As population has grown, I-275 has become more congested and malfunction junction has become a more dangerous bottleneck.

FDOT has had plans to widen I-275 and fix malfunction junction for over 20 years. The projects needed funding.

A few years ago we captured this from an article the now defunct Tampa Tribune published 10 years ago in an article they titled 'Malfunction' Moniker From Past Still Describes Revamped Junction no longer found online.

The constant shortfall of construction money suggests the local legislative delegation needs to do a better job advocating for local transportation improvements. And it suggests that Florida's congressional delegation needs to make more noise about the unfair return on federal gas taxes collected in Florida.

For decades Florida drivers have helped pay for highway earmarks in states with much less traffic and growth. But most important, every political and civic leader in Tampa should agree that packing four lanes of high-speed traffic into three lanes is an intolerable way to treat ourselves and to welcome our guests. If, instead of playing petty political games, our state and local leaders would agree on top priorities such as fixing the junction, it wouldn't now face another decade of malfunction.

This 2017 Tampa Bay Business Journal article reported "Tampa’s “Malfunction Junction” is among one of the worst traffic bottlenecks in the country, according to an analysis of GPS data from freight trucks."

FDOT has spent untold amounts of their time, money and resources over the last few years trying to work with Sunshine Citizens to mitigate and minimize their concerns but to no avail. The urbanists are simply unreasonable and uncompromising.

Cookson, Sunshine Citizens and their urbanists allies started by opposing FDOT's TBX plans to add two managed toll lanes of capacity in each direction to the I-275 north corridor.

That delay caused FDOT to send $600 million of state/federal gas tax monies we already pay, that was targeted for Hillsborough County, to go to Orlando and Central Florida for their I-4 expansion projects.

Cookson and her Sunshine Citizens were so gleeful and emboldened by FDOT's delay that they moved their position from opposing FDOT's original TBX expansion plans to now stopping all interstate expansion projects and tearing down I-275 north of downtown.

But FDOT did change their plans.

FDOT now plans to expand the north corridor of I-275 within the footprint it already owns. They will add a general lane of traffic of added capacity in each direction, add capacity to malfunction junction and make safety improvements in that interstate corridor.

With their "victim" narrative stale, Sunshine Citizens can no longer hide behind a "veil of victimhood". With the veil pulled back, the urbanists true agenda has been exposed which is a rabid uncompromising ideological opposition to roads, highways and interstates and those who use them.

Public policy must consider everyone who is impacted by it. It should not be based on irrational selfishness by a small vocal group, who refuses to compromise and shows so much disdain and disregard for the vast majority of others who use I-275 and want it expanded.

The Hillsborough MPO Board, which includes 10 elected officials who can be held accountable, will hold a Public Hearing on Tuesday, June 11th at 6pm at County Center.

Contact the MPO and tell them you support expanding our interstates and oppose tearing any part of them down. Request the MPO keep FDOT's I-275 interstate projects in their 5 year Transportation Improvement Program (TIP).

The entire Tampa Bay region risks losing FDOT interstate improvement funding for years or decades if these projects get delayed again or the Hillsborough MPO irrationally removes them from their TIP. That FDOT funding is state/federal gas taxes we already pay for.

Five county commissioners, who can be held accountable, will be voting Tuesday on the TIP.

Three countywide commissioners who must represent ALL their constituents in the county and not just one small group, Kimberly Overman, Pat Kemp and Mariella Smith, will be voting as well as
BOCC Chair and MPO Chair Commissioner Les Miller and Commissioner Ken Hagan.

These county commissioners can be contacted individually at: https://www.hillsboroughcounty.org/en/government/board-of-county-commissioners

Citizens can participate in the MPO public hearing in numerous ways to:
Common sense must prevail over ideology on Tuesday!

Tear Down this Interstate!
Costly Disaster! Tearing Down Interstates, the AFT Rail Tax and Train Rides for "Free"Add Capacity Not Tear Down Major Evacuation Route