The ruling by Judge Barbas yesterday on the All for Transportation tax hike confirms what Commissioner White and the Eye warned about last year but local media refused to report.

All for Transportation (AFT) never legally vetted their 5 page tax hike charter amendment and now Barbas threw out most of it.

In his ruling of AFT's $16 Billion transit tax hike, Barbas threw out the pre-determined appropriations and he struck out the limitations and prohibitions of funding new road capacity.

Barbas also reigned in the Independent Oversight Committee authority who will no longer have approval authority but can now only function as a glorified citizens advisory committee.

Barbas allows the sales tax to stand but little else does. Thanks to Commissioner White and his lawsuit, we now know that most of AFT's tax hike charter amendment was unlawful and a fraud.


As a result of the current ruling, the authority for how and where the AFT 30 year $16 Billion tax hike will be spent will be decided by the county commissioners as clearly stated in Florida Statute 212.055 that governs the local sales tax.

Now the spending food fight begins but this food must be done in the public domain that provides all stakeholders the opportunity to participate in the process.

Because now taxpayers don't have to be forced to hand HART $7-8 Billion or forced to fund costly trains and transit. Taxpayers are now not forced to hand the central planning bureaucrats at the dysfunctional Hillsborough Metropolitan Planning Organization (MPO) $160 million or forced to spend billions on costly complete streets, bike paths and road diets that increases congestion.

Now taxpayers, especially those in unincorporated, can demand this tax funds the new road capacity they want and need.

Now HART must present to the public and county commissioners why they want some of the AFT funds and what they will spend it on.

The federally mandated Hillsborough MPO central planners will have a very difficult time presenting any viable reason for why they should get any AFT tax funding. They have always been funded by the federal DOT to fund their mandated planning activities.

But AFT is already fervently pitching for this county commission to put back their pre-determined appropriation percentages and their burdensome regulations back in. Kevin Thurman, AFT spokesperson, an author of the fraudulent tax hike and the founding genesis of this big mess posted AFT's call to action on Facebook today: 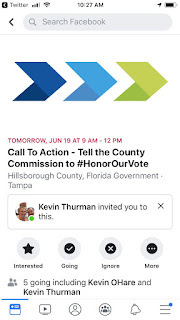 But if this county commission has the nerve to take such action, they may end up back in court.

How this will all play out will be very interesting because election year 2020 has already begun.

Countywide commissioner Pat Kemp is running for re-election next year.

Kemp appears to be most concerned about her own Seminole Heights backyard, disregarding the rest of the county, especially unincorporated where she rarely ventures. Kemp sided with the "tear down the interstates/make car travel painful" Sunshine Citizens group voting against FDOT's planned  I-275 widening projects at last weeks Hillsborough MPO meeting.

Commissioner Miller, who represents the smallest single county commission District 3 and is term limited next year, filed to run in the countywide race for Clerk of the Court.

All Democrats on the county commission, Kemp, Miller, and the other two countywide commissioners elected last year Kimberly Overman and Mariella Smith, are on record supporting the AFT transit tax hike.

Reported in this Times article about White's lawsuit last year:


County Commissioner Kimberly Overman said the referendum language was vetted closely and voters clearly spoke. “This is a waste of taxpayers’ money and that’s a shame,” Overman said.even

Democrat and County Commission Chairman Les Miller said, “This is just a way to stop this sales tax from being implemented and is going against the will of the people.”

But they should all be ashamed. They showed such ignorance, incompetence and bad judgment because we now know the All for Transportation transit tax hike charter amendment was such a fraud.

Why should anyone trust these commissioners going forward?

Vinik and the special interests elites spent $4 million on a tax hike campaign but apparently could not find a decent lawyer to vet the tax hike language.

Not withstanding that AFT Chair Tyler Hudson is a lawyer as well as AFT spokesperson Brian Willis. What happens when lawyers try to dictate the law by writing a tax hike over drinks...

Perhaps the most shame goes to local media, especially the Vinik bailed out Tampa Bay Times.

The Times was warned about these issues by Commissioner White, who brought up them up at his October 18th press conference, and warned by the opposition PAC No Tax For Tracks.

The Times intentionally chose to ignore the warnings and dug themselves into a hole. The Times cannot be trusted or believed on this issue.

AFT, the Democrat county commissioners, the business elites, the local media and Times were all wrong.

Barbas threw out almost all of the AFT tax hike, except for the tax itself.

It is hard to understand how he let such a fraudulent tax hike stand.

There is still the class action lawsuit.

There will be a spending food fight by the county commissioners.

There is an election next year and we will continue having elections.

This battle continues.
Posted by Sharon Calvert at 5:45 PM