But PSTA, whether it was intentional or incompetence or a combination of both, did a lousy job of informing the public, the communities impacted and engaging their stakeholders.

So now the wheels going flat are about to come off this unneeded BRT that duplicates existing bus services, removes a lane of vehicle traffic and parking on 1st Ave N and 1st Ave S, and removes a lane of vehicle traffic on Pasadena Avenue, including right before the Corey Causeway draw bridge.
This project has been a big mess from the get go because PSTA's real goal is to tap into getting tens of millions of transit grant dollars from the Federal Transit Administration (FTA) and state FDOT.

PSTA is using reserves to keep operating and is going insolvent. But instead of addressing their failing transit agency and their declining financial position as they promised after Greenlight Pinellas was defeated, they pursued handouts.

PSTA is pursuing over $20 million from the FTA and they misled the FTA in the grant request they submitted in August 2017. PSTA misleadingly included the route ending at the Don Cesar and falsely included St. Pete Beach as a funding partner who would provide PSTA $1.5 million for the project.

But PSTA misled everyone because their recommended alignment approved at PSTA Board meeting in January 2017 was only from downtown St. Petersburg to 75th Avenue. An extension down Gulf Blvd to the Don Cesar was identified as an OPTION only IF St. Pete Beach supported and funded the project.
PSTA never transparently and publicly disclosed that St. Pete Beach never agreed to fund the project so the option to extend the route to the Don Cesar was never valid.

PSTA has never been truthful about the project because they are so desperate for handouts from the feds and the state.

Now PSTA's lies are being exposed as opposition to the CA BRT grows.

St. Pete Beach does not want big PSTA buses running on narrow, congested Gulf Blvd. They are not going to fund any part of this new service. The commissioners stated their constituents are opposed to this BRT and don't want it in St. Pete Beach.

Yesterday St Pete Beach held a special session to pass a Resolution rejecting PSTA's proposal and telling PSTA their proposed CA BRT must end at 75 Avenue and not continue on Gulf Blvd to the Don Cesar.

S. Pasadena also passed a Resolution formerly opposing the CA BRT. They oppose PSTA removing a lane of vehicle traffic on S. Pasadena Ave in their community, including right before a draw bridge.

When two of the three municipalities along the proposed route oppose PSTA's CA BRT, "Houston there is a Problem".

And when St. Petersburg Mayor Kriseman sends this letter bomb to the Mayor Al Johnson of St. Pete Beach, the situation has gotten out of control. 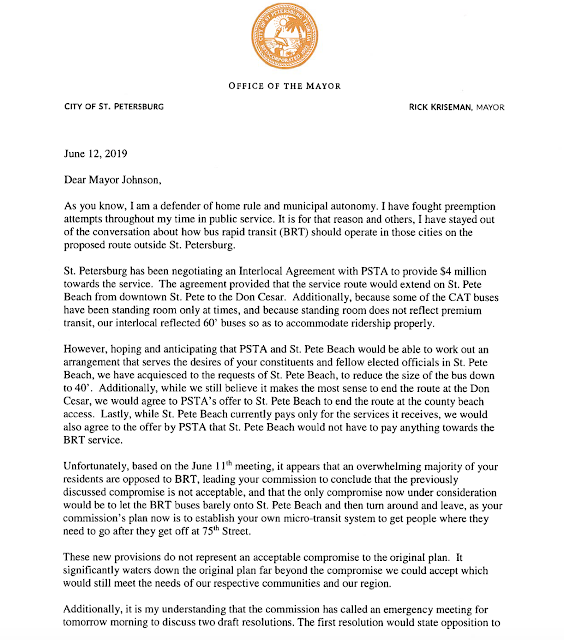 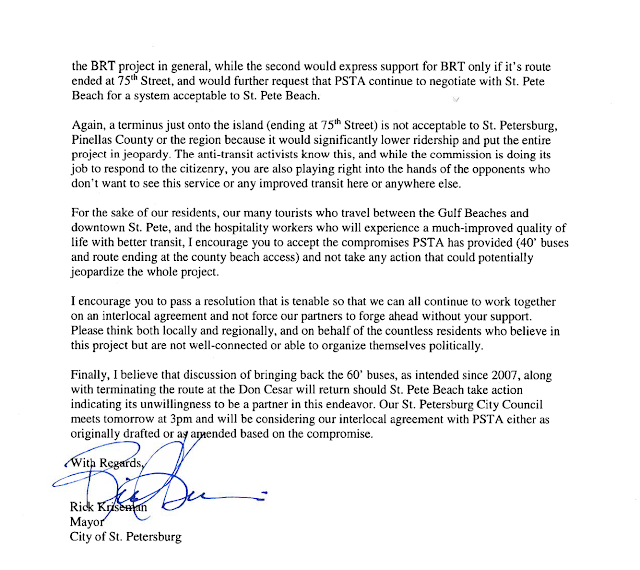 Kriseman could have picked up the phone and made a phone call. Instead Kriseman writes this letter that one St. Pete Beach commissioner described yesterday as a "mayor mafia move".

Kriseman, mayor of St. Petersburg not King of Pinellas County, needs to take some anti-bullying training. His arrogant letter makes his him appear either misinformed or he simply drank PSTA's kool aid.

Time for the PSTA Board to pull back PSTA's FTA grant request.

PSTA Board must start working on fixing its failing transit agency and declining financial position not pursuing handouts and new revenue sources.

Time for the FTA to shut down PSTA's federal grant request and remove CA BRT project from their funding que.

No federal or state funding should go to a failing transit agency who is going bankrupt.

And yes some heads should roll at PSTA and with those responsible for creating such a big mess.
Posted by Sharon Calvert at 8:38 AM