PSTA, who is using reserves to keep operating, is going broke.

Instead of addressing their failing transit agency, PSTA is pursuing a proposed $44 million bus rapid transit (BRT) service and pursuing over $30 million in federal and state grant money to fund it.

As we posted here, PSTA's BRT project is on life support. Two of the three municipalities (St. Pete Beach and S. Pasadena) along the proposed BRT route do not want the service in their community and have formally opposed it.

This PSTA project is in such dire straights the Tampa Bay Times felt compelled to write this editorial trying to cover for PSTA's mess:  Move forward with bus rapid transit linking St. Petersburg, St. Pete Beach. And stop the sniping.


The Times editorial board, consistently known for pushing unneeded, costly transit boondoggles, is not honest or truthful about what a fiscal disaster PSTA is and the big mess PSTA created with this BRT project.

It is in no one’s interest to spend millions in public dollars on a bus rapid transit project that is not as successful as it should be because the route does not go far enough down the beach.

The Times editorial fails to mention the PSTA Board at their meeting on January 25, 2017 approved PSTA's recommended route for this proposed BRT that ends at 75th Avenue in St. Pete Beach.

The continuation of the service from 75th Avenue down Gulf Boulevard to the Don Cesar was ONLY an OPTION - to be considered IF St. Pete Beach supported and funded the project - which St. Pete Beach never agreed to.
PSTA was outright dishonest in their grant submittal to the Federal Transit Administration (FTA) they submitted in August 2017 requesting over $20 million from the FTA.

This discrepancy was brought to the attention of the PSTA Board at their 4/25/2018 meeting. PSTA CEO Brad Miller acknowledged there was a problem but PSTA chose to ignore these issues until they recently blew up in their face.

St. Pete Beach has now formally stated they do not want PSTA big buses running on narrow, congested Gulf Blvd. Their residents have overwhelmingly told them they don't want this BRT service in their town.

The Times failed to mention that S. Pasadena, which is also along the BRT route, does not want PSTA's proposed BRT either.

Multiple condo associations in S. Pasadena, with 700-800 residents each, have passed resolutions formally opposing this BRT project. The S. Pasadena city council has formally stated they oppose it in a resolution they passed.

With this BRT project, PSTA plans to use road diets to remove a lane of vehicle traffic, as well as some parking, on 1st Ave N and 1st Ave S in St. Petersburg and along Pasadena Ave.

The Eye has spoken to a number of residents along 1st Ave N who did not know about this project or its impact. These residents are concerned this project will create more congestion in their neighborhood, make their roads more dangerous and make it more difficult for them to safely get out of their own driveways.

Obviously, PSTA never clearly informed the public about the use of road diets and removing valuable lanes of vehicle traffic for their proposed BRT service.

In the information PSTA provided the public, PSTA never showed the road diets this BRT project uses to take away a vehicle lane of traffic for a bus only lane. We asked PSTA why they were not clearly informing the public about this aspect of the project. They could not provide an answer.

We now know the answer.

As the public has become more informed about the project and its impact, no thanks to PSTA, opposition to PSTA's BRT project is growing.

The Times fails to report PSTA ridership has declined 20% over the last five years and they are a failing transit agency. A recent transit study done by the Center for Urban Transportation at USF confirms this.

The Times fails to report how PSTA is rapidly depleting their reserves just to keep operating. PSTA plans to use at least $6.5 million of their reserves on this BRT boondoggle project.

At PSTA's last Board meeting on May 29, 2019, this chart was presented showing that PSTA's reserves will be gone within three years. 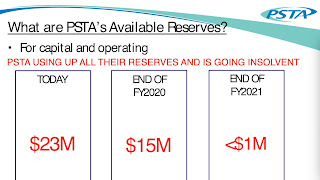 As we posted here, the BRT project would add at least another $1 million per year to PSTA's yearly operating expenses.  We also reported in that same post that PSTA's grant request to the FTA reveals their expenses have increased by $7 million between 2016 and  2017 while their ridership and fare box recovery have been deceasing.

With PSTA's recent decision to spend a million dollars, not previously budgeted for, on safety shields for their bus drivers, PSTA may use up their reserves even faster.

PSTA is desperately looking for a bailout. PSTA sees grant money for this BRT as their bailout ticket until we bet this failing transit agency pursues another revenue raising referendum.

With PSTA's failing finances, no grant funding from the feds or the state should go to this BRT project.

PSTA has been dishonest with everyone about their proposed $44 million BRT boondoggle.

And PSTA has a history of dishonesty.

PSTA got caught misusing federal transit security funds on their Greenlight Pinellas rail tax campaign in 2014 and were forced to return over $300K to the feds. PSTA promised to do fiscal due diligence after Greenlight failed and they never did.

So the Times editorial trying to cover PSTA's blatant dishonesty about their BRT project as "missteps" is a joke.

Because the truth is PSTA's proposed BRT boondoggle project is a costly mess.

And PSTA is even a bigger mess!
Posted by Sharon Calvert at 12:02 PM