Taxpayers have not been refunded one cent of the $562 MILLION of unlawfully collected 2018 AFT rail tax dollars. No problem, just put AFT 2.0 on the ballot.

The ONE public hearing (historically always 2 public hearings were held about sales tax referendums) last week was just a required checkbox in the process. Forty-four people made public comment at the hearing almost evenly split between 40 who opposed and 44 who supported.

However, there were more people who opposed protesting the rail tax outside County Center before the hearing who did not make public comment.

No one was outside County Center waving signs that said "Support Higher Taxes" or "Tax Me Tax Me Tax Me" or "Higher Taxes for Hillsborough" in support of the absurd $18 BILLION rail tax boondoggle.

In reality there were more people at County Center last Wednesday evening who opposed the $18 BILLION rail tax than who supported it.

We understand recent polls indicate the $18 BILLION tax is in trouble. That is not a good starting place. Support normally erodes and opposition grows for massive tax hikes, especially when voters know they are being lied to...again. The economic and political climate is 180 degrees different than 2018.

The current climate does not bode well for 30 year $18 BILLION new tax hikes. No one predicted just four years ago a pandemic, 40 year high inflation, skyrocketing food and gas prices, supply chain issues, labor shortages or a war in Europe. Somehow the Tampa Centric 5 and AFT think they know what is best for everyone for 30 long years.

What arrogance! The Tampa Centric 5 and their AFT transit allies want to tie the hands of taxpayers and future commission boards for 30 long years with "their" costly Tampa focused transit funded agenda.

And they know once any of the AFT 2.0 tax dollars are bonded out, the tax can never be repealed...no matter how much it fails.

The entire county commission public hearing can be watched here.

Anyone, including the media, referring to this massive tax hike as a 1 CENT or a PENNY tax is spreading disinformation. Tax rates are conveyed in percentages not dollars and cents. The Ordinance and referendum ballot summary language passed by the Tampa Centric 5 clearly state it is a ONE PERCENT sales surtax.

This tax is an additional 1 PERCENT tax that will be levied on top of Hillsborough's current 7.5 PERCENT. Going to a high sales tax of 8.5 PERCENT is an inflationary 13.3% increase over the County's current sales tax percentage and will make Hillsborough have the highest sales tax rate in the state. 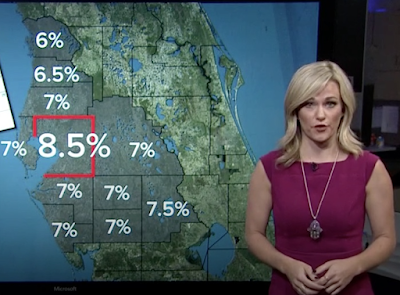 At the public hearing, there was a clear divide between the Tampa urban core downtown suits (AFT's donor base) and urbanists who support this tax and those who reside in unincorporated Hillsborough and New Tampa who oppose the tax. New Tampa is the step child Tampa relies on for their property tax revenues but does little for them.

All of those who spoke in support of the AFT 2.0 $18 BILLION rail tax do-over want transit. They may have mentioned bike paths, sidewalks, trails and safety but none of them want road expansion and new auto/vehicle lane capacity.  Some who spoke in support are the same people who want to tear down our interstates and ban all interstate expansions in Tampa Bay.

Orange County is also pursuing a ONE PERCENT tax hike. They must start funding their SunRail SunFail commuter rail fiscal disaster and want to fund other transportation/transit projects. Orange County's current sales tax rate is 6.5 PERCENT as they currently only have a Half Percent School Capital Outlay local discretionary sales tax that will expire in 2025.

Hillsborough County already has multiple local discretionary sales taxes: the Half Percent Infrastructure aka the Stadium tax that expires in 2026 (the County will be begging voters to reauthorize this next since AFT 2.0 provides no dedicated funding for new auto/vehicle lane capacity), the Indigent Care Surtax that only expires if it ever got repealed and a Half Percent School Capital Outlay sales tax that expires in 2028. 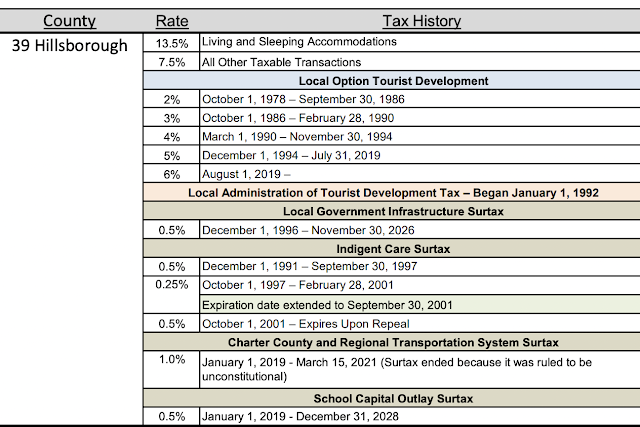 In addition, transit agency HART has its own existing revenue sources. All property owners in Hillsborough County EXCEPT those in Plant City pay a .5 millage rate property tax to HART. Plant City decided decades ago not to join HART even though HART has provided express bus service from downtown Tampa to Plant City.

HART's property tax revenues are ballooning but this massive AFT 2.0 rail tax do-over does not eliminate HART's existing property tax. With AFT 2.0 all property owners except those in Plant City get hit with a double whammy of local taxation for HART - though most will rarely if ever use transit.

No wonder a common question of those who oppose the AFT 2.0 $18 BILLION rail tax is "Where are all the existing tax dollars going"? To pet projects, ideological initiatives, enriching consultants, special interests, golden handcuff county employee benefits, county employee raises, wasted down a big black hole?

And where is the taxpayers refund of the $562 MILLION of illegally collected sales tax dollars collected from the unlawful 2018 AFT rail tax?

Orange County provided a 1,153 page list of projects they planned to fund with their sales tax hike. At least they are providing a high level of transparency to their voters.

The Tampa Centric 5 prefers no transparency and keeping voters in the dark like a mushroom. All they provide is regurgitated 2018 AFT crafted legalese spending buckets, restrictive earmarks and questionable regulations in their 8 page tax hike referendum Ordinance.

AFT are not transportation or traffic engineers or experts. They are a pro rail/transit Political Action Committee (PAC) funded by wealthy special interests who benefit the most from the tax.
With the new AFT 2.0 same as the old 2018 illegal AFT, who is really running County Center? AFT's wealthy special interests and their pro rail allies who benefit the most?
High sales taxes are inflationary and very regressive. They hurt the poor, low income and fixed income the most.
And as Charlotte Greenbarg, who opposes the $18 BILLION AFT 2.0 rail tax do-over, said at the public hearing:

The rich get richer and the poor get poorer.

Stay tuned and please subscribe here to Keep your Eye on EyeOnTampaBay.

Posted by Sharon Calvert at 9:26 AM