Democrat County Commissioner Pat Kemp Gets 4 Pinocchios For Claiming the ONE PERCENT AFT 2.0 Rail Tax Do-Over is a ONE CENT Tax Hike

Kemp spoke about the proposed AFT 2.0 $18 Billion rail tax do-over. She already knew the Tampa Centric 5 Democrats (herself, Kimberly Overman, Mariella Smith, Gwen Myers, Harry Cohen) would put it on the November ballot. Kemp had to catch herself several times as she spoke because the actual vote to put it on the ballot had not yet taken place.

Kemp never said a word about DEDICATED funding for new auto/vehicle lane capacity....because AFT 2.0 has NONE.

Someone in the audience pushed back on Kemp that it is a ONE PERCENT (NOT ONE CENT) $18 Billion tax on the ballot. Kemp doubled down and insisted AFT 2.0 was a One Cent, One Penny tax.

Of course that is false aka a lie. Kemp was attempting to spread disinformation to obscure the truth of how massive the $18 BILLION AFT 2.0 rail tax is.

Five days later on April 20, Kemp voted at the public hearing to put AFT 2.0 on the November ballot. She voted for the County Ordinance and ballot summary language (see below) that clearly states the AFT 2.0 rail tax do-over is a 30 Year ONE PERCENT sales tax hike. 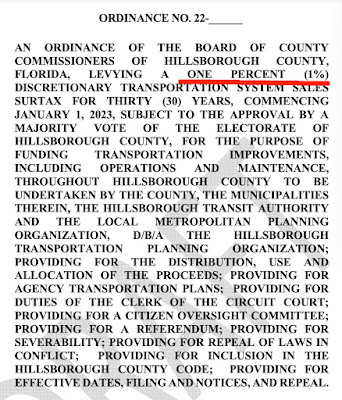 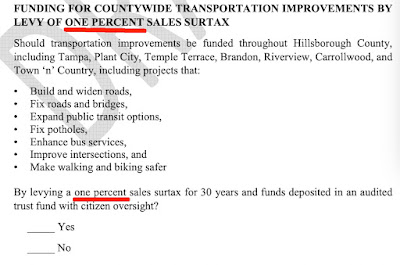 "One Cent" and/or "one penny" is nowhere to be found in the Ordinance and ballot summary language.
Kemp's actions speak louder than her words.
Kemp understands the burdensome funding buckets and restrictive earmarked funding percentages within the rail tax. She knows AFT 2.0 is a massive ONE PERCENT tax because that is what she voted for.
We know AFT 2.0 is an inflationary 13.3% tax hike from 7.5% to 8.5% - the highest in the State. It will add to the raging inflation rate of almost 10% in Tampa Bay.
Kemp misrepresented AFT 2.0 as a One Cent tax - to obscure the truth that the rail tax do-over is a massive 30 year ONE PERCENT $18 BILLION tax hike.
Kemp gets Four Pinocchios for trying to spread disinformation.

Posted by Sharon Calvert at 8:53 AM