The Tampa Centric 5 county commissioners will vote tonight at the Hillsborough County public hearing to put the AFT 2.0 30 year ONE PERCENT (NOT ONE CENT) $18 BILLION rail tax do-over on the November 2022 ballot.

After the Florida Supreme Court threw out AFT's 2018 rail tax as illegal and unconstitutional last year, AFT's largest donor Jeff Vinik said "While today’s court ruling is a setback, we must look ahead and forge a new path forward for 2022..."

With their timeline soon closing, the Tampa Centric 5 must act hastily to put the "Old Path Backwards" AFT 2.0 on the November ballot. They have the votes, the County held a handful of "their" messaging meetings a measly 257 people attended and the ONE public hearing is simply a "checkbox" to get it done.

The Tampa Centric 5's "Old Path Backwards" AFT 2.0 regurgitates the bad and burdensome policies of AFT's 2018 illegal rail tax. But the campaign coffers of four of the Tampa Centric 5 (Overman, Myers, Cohen and Smith) running for re-election in November are already being filled by Vinik and other AFT wealthy donors.

And we can expect many of the same rail cartel tactics used in 2018 are being used in 2022.

Voters were unaware in 2018 how inside bureaucrats and special interests were intertwined with AFT and collaborating behind the scenes about AFT's illegal rail tax.

From Public Records Requests, the documents below provide some insight into a group of women inside bureaucrats and special interests who were collaborating in 2018 about AFT's rail tax. They called themselves the "Wonder Women".

April 3, 2018 message from Cassandra Borchers, Chief Development Officer at PSTA (Pinellas County's transit agency) to Janet Scherberger (formerly known as Janet Zink) - who at the time worked for TIA CEO Joe Lopano as his Director of Communications. We redacted their cell phone numbers.

April 27, 2018 message from Zink/Scherberger to Borchers about her meeting with Kevin Thurman, a chief architect of AFT's 2018 illegal rail tax.

As reported here, transit activist Kevin Thurman was coordinating with Scherberger in April 2018 about AFT's proposed rail tax. Thurman admitted they were intentionally ramming their rail tax onto the 2018 ballot at the last minute to "surprise" their opposition.

Thurman wanted buy-in from Joe Lopano who sits on the Hillsborough Transportation Planning Organization Board (TPO) Board. Scherberger often sat in for Lopano as a voting Board member of the TPO.

April 27, 2018 message from Borchers to Scherberger about Robert Watkins. 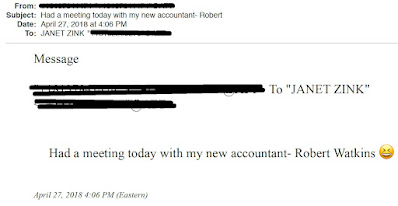 Robert Watkins is a Board member of the Hillsborough County Aviation Authority who hired TIA CEO Joe Lopano. Both Robert Watkins and his wife Nancy Watkins are accountants and the Treasurers for the All for Transportation PAC.
Robert Watkins, along with AFT Chair Tyler Hudson, AFT spokesperson and Vinik employee Christina Barker and Janet Scherberger, then TIA's Director of Communications are Officers of Keep Moving Hillsborough, Inc (KHM).
KHM is the connected non-profit dark money side of AFT that is not required to disclose their donors and expenditures like the AFT PAC must.

Below is an email thread from August 2018 among the "Wonder Women" about the AFT rail tax. 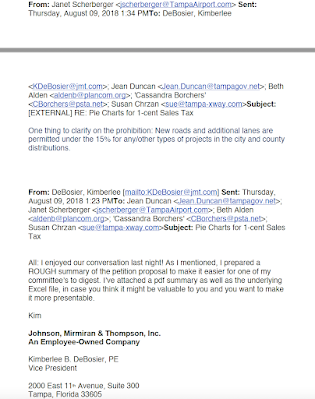 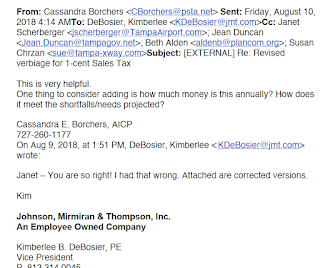 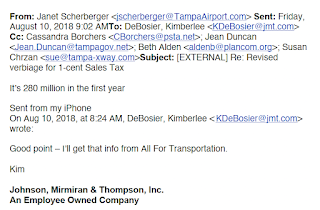 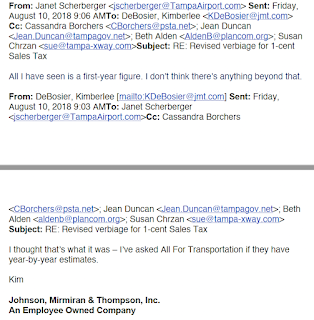 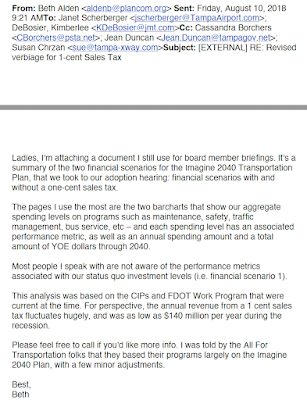 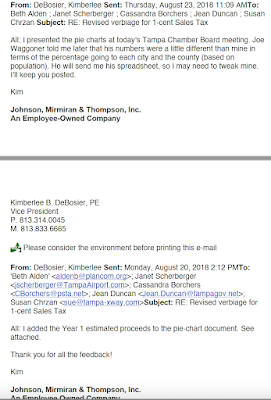 In October 2018, the "Wonder Women" rescheduled their own group meeting because they planned to celebrate with AFT on 11/15/2018...For Reals! 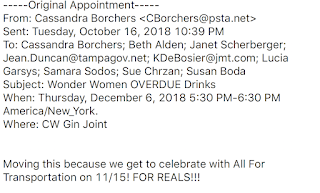 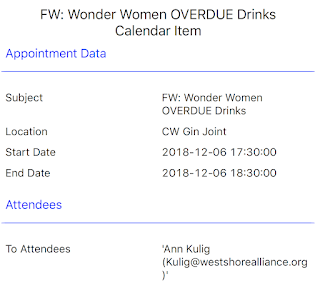 This is a list of the "Wonder Women" from the documents above and who they are:
These women have six figure salaries, well above the median income in Hillsborough County. The highly paid bureaucrats were collaborating on the taxpayers dime about imposing a massive tax hike on the very people who pay their salaries. Many of the bureaucrats and their government entities would greatly benefit and they could get big pay raises with the AFT rail tax.
While the "Wonder Women" may think highly of themselves, many others may not. It is not very admiring or smart to be collaborating with AFT and amongst themselves about a massive illegal tax referendum, especially since most of these women are surrounded by lawyers.
We expect these people are at it again for November's AFT 2.0 rail tax boondoggle.
Perhaps the "Wonder Women" should change their name to "Deceptive Divas".
Remember in November.
Vote NO!
Posted by Sharon Calvert at 10:50 AM