Politics Has Taken Over HART Board, Start Regime Change by Removing the 2 AFT Board Members Who Inflicted a Big Legal Mess on Hillsborough County

The All For Transportation (AFT) 2.0 30 year 1 PERCENT (NOT 1 CENT) $18 BILLION rail tax do-over is all but assured to get on the Hillsborough County November ballot. The rail cartel's Tampa Centric 5 Democrat county commissioners have the votes to do it.

HART's dismal ridership is less than 2% of the total population in Hillsborough County. No worries...With AFT 2.0, taxpayers will be forced to hand 45%, or about $8.2 BILLION, of the massive tax to transit agency HART.

HART will use the new Billions, in addition to HART's current .5 millage rate property tax revenue and other revenue sources they receive, to pay for costly rail projects in Tampa that benefits wealthy downtown special interests.

Who governs and provides oversight of HART? Who would be overseeing any new Billions to HART?

No Surprise! Four of the Tampa Centric 5 county commissioners, Pat Kemp, Kimberly Overman, Mariella Smith and Gwen Myers, sit on the HART Board. 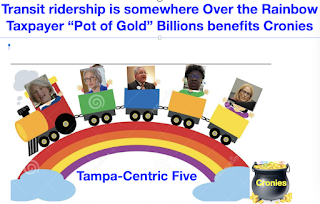 At least 9 of the 13 HART Board members are Tampa centric. But it is the taxpayers in unincorporated Hillsborough who pay the overwhelming majority of HART's property tax revenues to fund HART's services that are mostly in Tampa.

No Surprise! AFT supporter and rail enthusiast Tampa Mayor Castor appointed herself to the HART Board.

Surprise Surprise! The Chair and Co-Founder of the All for Transportation (AFT) Political Action Committee (PAC) Tyler Hudson and AFT Co-Founder Rena Frazier were both appointed to the HART Board as the Tampa Bay Times reported:

Frazier is the second All For Transportation co-founder to join the board this year, following Tyler Hudson’s appointment by the city of Tampa.

Hudson's HART bio states he is a lawyer......who apparently does not understand Florida law and put an unlawful tax hike referendum on the 2018 ballot. In addition, (Surprise!) Hudson previously was with Hilltop Public Solutions in DC who (Surprise!) helps "clients inject their voices into local policy debates", helps manage campaigns and mobilize grassroots.

In other words Hudson is a professional lobbyist and campaign public affairs person. AFT was always astroturf funded and run by professional elites.

Hudson left out of his HART bio that AFT's 2018 rail tax initiative was ruled illegal and unlawful and thrown out in its entirety by the Florida Supreme Court. Such reality is not a resume enhancer.

Frazier's HART bio states she is a founding member of AFT and a lawyer......who also must not understand Florida law because she helped lead AFT's illegal rail tax effort in 2018.

HART Board member Commissioner Pat Kemp, another lawyer who supported AFT in 2018......who must not understand Florida law. Kemp, helping lead the charge for the AFT 2.0 $18 BILLION rail tax, ironically makes the case for why transit does not work for the majority of people and why it's absurd to hand HART $45 BILLION:

Costly rail and fixed guideway transit is less flexible than bus routes so Kemp makes the argument she can't ride an expensive train either. She wants to force others out of "their" vehicles so she can use the roads with her vehicle.
HART Board member Tampa City Councilman Luis Viera is another lawyer who supported the 2018 illegal AFT rail tax........and must not understand Florida According to this WTSP article "Viera filed a motion asking the city attorney to see if it's legal for Tampa to finally spend the money before the Florida Supreme Court ruling."
Can you imagine the even bigger mess if any of the illegal AFT tax funds had been spent before the final court ruling?
HART Board member Marvin Knight, appointed by Hillsborough County, is (Surprise!) a member of the West Tampa Community Redevelopment Area (CRA created by Tampa) and he is also Tampa focused.
Historically, a majority of HART Board members were citizen appointees who resided throughout unincorporated Hillsborough and within the cities of Tampa and Temple Terrace. That ensured a more equitable representation and greater knowledge from a wider base of the County's population. (Note Plant City is NOT a member of HART and residents and businesses in Plant City do not pay HART's .5 millage rate property tax.)
Today a majority 7 of the 13 HART Board members are elected officials - Kemp, Overman, Smith, Myers, Castor, Viera and Temple Terrace Council member Gil Schisler. They got themselves appointed. All but Schisler are Tampa focused.
And HART, of course, has legal counsel. David Smith has been HART's attorney for many years. He never warned the HART Board about AFT's numerous legal issues in 2018 and he owes an answer for why he did not warn them.
HART has at least 4 attorneys and a past Tampa police chief sitting on their governing board who supported the illegal AFT rail tax effort in 2018. They all, including David Smith, should understand Florida law and should have known better.
Commissioner White's lawyer stated at the February 2020 Florida Supreme Court hearing on White's AFT lawsuit that any first year law student would know the AFT tax hike referendum violated Florida Statute 212.055. Actually it does not take a law degree, it just takes reading the Statute.
Indignantly, two of the attorneys on the HART Board are founders and leaders of AFT who perpetrated their unlawful rail tax on the voting public and lied about it. What a slap in the face to all the taxpayers in Hillsborough who are still owed a refund.
Who can trust this HART Board? With the majority of Board members elected officials and two members directly associated with the AFT Political Action Committee (PAC), politics has totally taken over this Board.
The HART Board needs a regime change. That starts by removing AFT's Tyler Hudson and Rena Frazier from the Board now.
Hudson and Frazier helped inflict a big legal mess and $562 MILLION refund mess on Hillsborough County. They cannot be trusted with fiduciary responsibility over any tax dollars. And once on the ballot, they will have a big conflict of interest associated with a political committee pushing the AFT 2.0 tax that greatly benefits HART.
Then Hillsborough County needs to revert back to their own policy of appointing citizens who reside in unincorporated Hillsborough to represent the County on HART.
Because when the politics are removed, no one with any common sense or fiscal sanity would hand HART $45 BILLION.

Stay tuned and keep your Eye on EyeOnTampaBay by subscribing here.
Posted by Sharon Calvert at 12:40 PM