Cannot Trust Those Closely Intertwined With All for Transportation Especially As AFT 2.0 $18 BILLION Rail Tax Do-Over Is Put on the Nov. Ballot

These people are closely intertwined with the pro rail All for Transportation (AFT) Political Action Committee (PAC) funded by the wealthy special interests. Their collusive behavior and cozy relationships breeds distrust.

They work together, whether ethical or not, and have stacked transportation decision making positions in Hillsborough County with themselves. The result is they reside within their own group think bubble they rarely venture out of.

This is unethical, especially when the TPO would be handed a boatload of new millions from the AFT rail tax. But is it legal and A-OK for a taxpayer funded agency to embed content from a biased Political Action Committee on their website?
The TPO removed the video only after they got caught.
We know AFT met with the Director of the TPO, Beth Alden, at the TPO's office in County Center in 2018. They discussed AFT's rail tax that would greatly benefit the Alden's organization.
The County has specifically stated NO political activity can be conducted by the public in County Center. But an unelected bureaucrat from the TPO can meet with a Political Action Committee about a highly politicized rail tax referendum in County Center?
I asked Alden on August 27, 2018 about meeting with AFT and the proposed AFT rail tax. She tried to respond that she had not taken much time looking at the transit tax hike petition.
We then found out Alden was so knowledgeable about AFT's rail tax that Tampa City Council representative Luis Viera invited Alden to speak about it at the August 23, 2018 Tampa City Council public meeting. As reported here:

Why did Alden feign ignorance about AFT's rail tax on August 27, 2018?
Tampa's Public Woks Director Jean Duncan was also invited to the August 23, 2018 Tampa City Council. AFT's rail tax would hand the city of Tampa over a BILLION dollars of new AFT dollars. Duncan, another unelected bureaucrat, astoundingly presented the AFT Political Action Committee's logo'd REFERENDUM Fact Sheet.
AFT was NOT initiated by any elected official. But pro AFT rail tax referendum presentations were being given by unelected bureaucrats in Tampa City Hall as if it had been.

In addition, the City of Tampa uploaded an AFT Political Action Committee video to their city governments Youtube Channel. 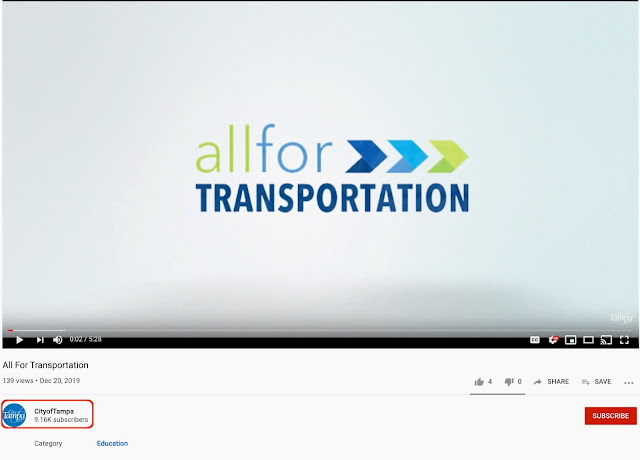 The Hillsborough TPO has failed the residents of Hillsborough County for many years. Even with a School Board member added to the TPO in 2015, the TPO has totally ignored all the road improvements required for 38 new schools planned in the County over the next 15 years.
What Alden failed to say in her August 23, 2018 presentation is the AFT rail tax does NOT fund new road capacity, including the new capacity REQUIRED to build new schools. The TPO has focused way too much time on rail and tearing down interstates instead of improving the roads and highways in Hillsborough County.
Who sits on the TPO's governing Board who are supposed to provide Oversight and who approve all the TPO's transportation plans? The Tampa Centric 5 Democrat county commissioners and the CEO of HART.
The Tampa focused commissioners will vote April 20th to put the AFT 2.0 $18 Billion ONE PERCENT (NOT ONE CENT) rail tax do-over on the November ballot.
The Tampa Centric 5 are demanding taxpayers hand a $100 MILLION over 30 years to the failed TPO. The TPO stated in 2015 they only needed $16 MILLION over 20 years to do their mandated transportation planning. Where will all those new AFT 2.0 tax dollars go? To bloat Alden's TPO bureaucracy, turn the TPO into a taxpayer funded marketing agency for trains, transit, tearing down interstates and enrich crony consultants. This is total insanity.
The Tampa Centric 5 also demand taxpayers hand at least $8.2 BILLION to HART, a transit agency that has a dismal ridership of less than 2% and lots of issues.
As we reported here, AFT Chair Tyler Hudson and AFT Co-Founder Rena Frazier, four of the Tampa Centric 5 and Tampa Mayor Castor sit on the Tampa focused HART Board.
Who was pro rail Mayor Castor's largest donor in 2019? Jeff Vinik, who dumped $53K into Castor's campaign. Vinik is AFT's largest donor.
HART has been mismanaged while these same people sit on the HART Board.
The rail cartel's elected officials and numerous unelected bureaucrats are closely intertwined with AFT. These elected officials are intertwined with AFT's wealthy donors.
These same elected officials are putting the AFT 2.0 30 year ONE PERCENT (NOT ONE CENT) $18 BILLION rail tax do-over on the November ballot.
Taxpayers cannot trust these people with a penny more of any new tax.
Remember who these people are in November and how much distrust and damage they have caused Hillsborough County.
Vote NO!
Stay tuned and please subscribe here to Keep your Eye on EyeOnTampaBay.