With Every Word They Say, Every Game They Play - We'll Be Watching the 5 Democrat Commissioners Focus on Tampa Rail/Transit Not Needed New Road Capacity

We are right again!
Hillsborough County commissioners Kimberly Overman, Mariella Smith, Harry Cohen, Gwen Myers and Pat Kemp are the Tampa Centric 5 county commissioners. All five are Democrats. Overman, Kemp and Smith are countywide commissioners whose focus is the urban core of Tampa, not unincorporated Hillsborough where most of their constituents reside.
The Tampa Bay Business Journal (TBBJ) article confirms this in their March 23rd post about the motion by Myers for a do-over AFT 2.0 30 year ONE PERCENT (NOT ONE CENT) $18 MILLION rail tax on the November ballot:

The motion was spearheaded by Commissioner Gwen Myers, who threaded the line between the commissioners looking out for unincorporated Hillsborough County's interests (Stacy White and Ken Hagan) and the Tampa-focused commissioners (Pat Kemp, Kimberly Overman, Mariella Smith and Harry Cohen).

The Tampa Centric 5 are transit activists who want taxpayers in unincorporated Hillsborough to fund costly rail projects in Tampa. They are hostile to adding new road capacity and hostile to the super super super majority in Hillsborough who use their cars and vehicles.
What one says, does and who they associate with reflects their ideology and agenda. Connect the dots.
Commissioners Overman and Kemp are associated with the STOP TBX transit activists and their formal organization Sunshine Citizens. These activists opposed the expansion and widening of I-275 and fixing malfunction junction that have been in FDOT's plans for decades.
Commissioners Kemp and Smith have been leaders with the Tampa Bay Sierra Club for many years. The Sierra Club advocates for the costly "Green New Deal". They endorsed Kemp and Smith and supported the 2018 illegal and unlawful All for Transportation (AFT) rail tax. The Sierra Club's December 2016 newsletter stated that "On November 8 the voters of Hillsborough County elected Sierra Club activist Pat Kemp to the County Commission".
Sunshine Citizens want to make congestion worse and force people out of their cars to use transit as their VP Michelle Cookson posted on Facebook in 2019.
Sunshine Citizens posted below post on Facebook on March 3, 2022. 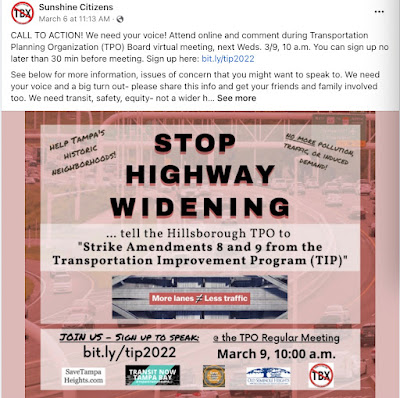 A transportation improvement plan that requires a single occupancy vehicle for a family to economically survive in this County is irresponsible and will NOT be a policy that will "allow" our communities to thrive, our businesses to thrive and is "in direct conflict to our responsibility towards equity.

Overman said this at the February 21, 2019 BOCC Workshop:

it would be a wise idea for the individuals that need to understand transportation planning what additional capacity means….you actually can create the goal or achieve the goal of congestion reduction without adding lanes to the process.

Overman called her own constituents "Super Stupid" because she knows what is best for everyone.
Smith, also a countywide commissioner, confirms her Tampa Centric focus with her own comments in the TBBJ article referenced above:

Mayor Jane Castor wrote a letter on Tuesday night to each of the elected officials urging them to support HART at a 45% clip, Commissioner Mariella Smith said. The Tampa Bay Chamber of Commerce [formerly the downtown Tampa Chamber] and the Urban League also spoke in support of the transit.

Wow! Countywide commissioner Smith takes her marching orders from Tampa Mayor Castor and the downtown special interests. Castor and the downtown special interests want Smith's constituents in unincorporated Hillsborough to pay for costly rail in Tampa. No Surprise! Castor was Smith's first major endorsement.
At the February 21, 2021 BOCC Workshop we referenced above, Smith chimed in:

...she thinks voters voted to put massive amounts of new tax dollars (about $7-8 Billion) to pay for costly transit and not to fund new roads.

According to Smith, instead of road widening the county needs to focus on getting some cars off the road. She prefers pursuing another CSX/SunRail SunFail commuter rail.

Activist Smith recently took to her official commissioner Facebook Page to get her activist base to oppose FDOT's proposal to widen US 301.

In June 2020 when people were totally focused on the pandemic, Kemp tried to remove all of FDOT's proposed projects to widen of I-275 north of downtown and fix malfunction junction from Hillsborough's Transportation Planning Organizations (TPO) transportation plans. Some of FDOT's projects survived.
But last year the Tampa Centric 5 got the project to add capacity to I-275 north of downtown to Bearss Avenue removed from the TPO's 5 year Transportation Improvement Plan. I-275 is a major evacuation route for Tampa Bay, is part of the State's Strategic Infrastructure and a couple hundred thousand people use it everyday.
Kemp has been a transit activist for years and she became a member of the HART Board after she was first elected in 2016. Ironically, when the Tampa Bay Times asked HART Board members if they ever used the bus, Kemp responded (red emphasis is mine):

"I would like to ride transit more if I wasn't so busy working on the transit issue. (Kamala Harris word salad)... It's not very amenable to my kind of schedule. I'm not an 8-to-5 in one place type of person."

"There's no way you can do it. For office workers who have set hours and set places, it works very well…I have to have a vehicle."

"I'm in and out of the office all the time, so it would be really inconvenient for me to use the bus system."

The hypocrisy of Kemp's "cars for me but not thee" is astounding. Kemp makes the case for why transit does not work for most Americans.
Americans are not 8 to 5 one place people. We drop our children off at school before work and at after school activities after work, we run errands, we check on elderly parents, we go to doctors appointments, go to the gym, grocery shop, go to the cleaners, take classes etc. etc. etc.
Today many "office workers" are telecommuting and working from home which often adds more flexibility to their work day. The pandemic put paradigm shifts that begun before the pandemic on steroids. More people telecommute, use online commerce, online banking, telemedicine, online education, online shopping, online everything more than ever before.
The city of Tampa is about a third of the population of Hillsborough County. Four of all seven commissioners - Overman, Kemp, Myers and Cohen - live in the city of Tampa. County wide commissioners Kemp and Overman both live in Seminole Heights where the Tampa Bay Sierra Club hosts their meetings.
Myers single District 3 is considered a minority district. With raging inflation and soaring food prices, why does she support a massive tax hike that will add another financial burden on her constituents? Why does she want to fund costly Tampa rail projects that will gentrify her constituent's neighborhoods displacing low-income families and small businesses?
As reported here, Cohen, a former Tampa City Council representative, clearly stated:

We must reduce congestion by getting single occupancy vehicles off the road.

Cohen and Kemp are lawyers who supported the illegal and unlawful AFT rail tax in 2018. Shouldn't they understand Florida law and have known better?
Cohen was legal counsel for one of the Defendants in the AFT lawsuit but he did not disclose that to voters in 2020. No surprise that he wants a rail tax do-over.
The Tampa Centric 5 will put a do-over AFT 2.0 rail hike on the November ballot. They have the votes. They are beholden to the Tampa rail cartel wealthy special interests funding their campaigns and to their Tampa transit activist base.
The Tampa Centric 5 (and the rail cartel's marketing campaign) will try to restrain themselves from publicly using the word "rail" which is toxic in Hillsborough County.
However, the Tampa Centric 5 sit on the Board of the Hillsborough County Transportation Planning Organization (TPO). They consider the TPO's 20 year 2045 Long Range Transportation Plan to be their "gold standard" The LRTP they approved includes 8 rail projects.

When the Tampa Centric 5 speak of the TPO's long range transportation plan, they are also referring to these rail projects. Whether they restrain themselves from saying rail or not, the Tampa Centric 5 cannot hide from the LRTP's rail projects in the plan they approved and want to fund....with the AFT 2.0 30 year ONE PERCENT (NOT ONE CENT) $18 BILLION rail tax do-over.
We appreciate media finally admits what we have said for years. The Tampa Centric 5 Democrat commissioners, including all 3 countywide commissioners, are Tampa focused.
Four of the Tampa Centric 5 are running for re-election in November with the AFT 2.0 $18 Billion rail tax they are pushing. Not only the public but the media are taking notice of their Tampa focused agenda.
The political philosophy of the Tampa Centric 5 is: Costly and outdated Tampa rail, transit, little to no funding for new road capacity, tearing down interstates/highways and trying to force people out of "their" vehicles.
The Tampa Centric 5's own words, actions and who they associate with confirms their transit ideology.
Every word they say and every game they play, the Eye will be watching them.
Posted by Sharon Calvert at 1:56 PM