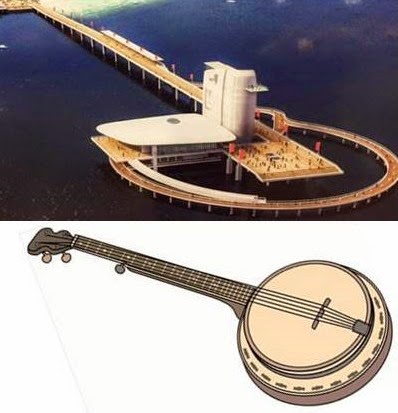 You may or may not remember from the days of the LENS debacle our two intrepid truckers from St. Petersburg, Elroy and Cletus, along with some of their friends, had a lot to say about the LENS and the Pier. Well - their back weighing in on the ALMA and the whole Pier issue.

Elroy had just cleared Atlanta heading down to St. Pete with a trailer load of dog food for one of the local pet store chains. He eased the big Cat powered Kenworth up to 70 and smiled as the diesel purred. A quick check of all the gauges, everything fine he punched up a classical music station on the HD stereo.

After few minutes of quiet reverie with a movement from Beethoven, the CB crackled to life, "Elroy, Elroy, this here's Cletus got your ears on?"

"You been following the Pier mess," Cletus asked?

"What a mess, I thought they were going to rank three finalists on Friday," Elroy replied.

"Ya... well, I had a layover so I watched the whole thing on TV. Kind of a cross between watching paint dry and getting a tooth pulled with no Novocain."

"The Committee jawed for almost twelve hours and couldn't make a decision, then that guy Mike Connors blew the whole thing up trashing the pyramid and started pushing the ALMA design," Cletus replied. "Have you noticed that thing kind of looks like a banjo when you look at from the land side?"

Cletus must be losing it Elroy thought.

"Ya... just take a closer look at one of those overhead shots from the land side it looks like a banjo," Cletus said. "Plus, that box out on the end is just a box. You can lay the thing on its side or on its back and it's still just a box. At least the inverted pyramid has some personality."

Elroy reached across the seat and grabbed a news paper article on the Pier. He looked carefully and sure enough with a just a little imagination it did look like a banjo.

Elroy smiled as he squeezed the CB push to talk button, "The Big Banjo, he chuckled, looks like we got the new name."  "Should make for some really interesting T shirts." "You know that thing was my last choice on the survey."

"Mine too," Cletus replied. "As far as I can tell it was almost everyone's last choice except Mike Connors and his goofy Committee."  "People are so upset thee is already a petition drive getting under way."

"You would think by now they would have figured this Pier thing out," Elroy replied.

"Well, obviously not so much," Cletus replied. "Catch you on the flip side."

Elroy turned the stereo up and the thought crossed his mind, "When the people indicate their preference how can you screw that up?"