What was front and center during this election? Cronyism, corruption, rejection of political insiders and a huge lack of trust in our government and the media. Hmmmm,,,,Sound familiar close to home?  Like the crony, corrupted Go Hillsborough campaign?


Backers of the referendum now lament what they see as a missed opportunity to capitalize on an electorate they believe would have viewed the referendum favorably.

Before it failed, proponents said internal polls showed support as high as 65 percent. And it had backing from business groups like the Greater Tampa Chamber of Commerce.

Well…..the Times did have to backtrack a bit on their narrative

It's entirely possible Hillsborough's proposal, dubbed Go Hillsborough, would not have survived a negative campaign and grassroots opposition from anti-tax and anti-rail factions, just as they helped defeat a 2010 referendum and a similar 2014 ballot initiative in Pinellas County. It faced headwinds, too, from some traditionally liberal groups who felt the proposal lacked a substantive transit investment.

Who pushed this narrative with the Times? The backers of the proposed sales tax hike referendum? Those backers included deep pocketed special interests, the Tampa Chamber of Commerce, Commissioners Les Miller and Ken Hagan, Mayor Buckhorn, the Times editorial board and the cozy confidante of them all Beth Leytham.


As demonstrated by Tuesday's election, Hillsborough is inching from purple to blue in ways that should embolden leaders to push for it sooner rather than later, said Beth Leytham, the public relations consultant who worked on Go Hillsborough.

Can't make this stuff up. The very person who led the failed, crony and corrupted Go Hillsborough campaign thinks a sales tax hike would have passed this election. There is no evidence to support such hypothetical as even deep Blue Broward County rejected a tax hike.

Let's break this down.

The Times continues to ignore that trust, especially regarding our county budget and where the county spends our existing revenues, continues to be a big issue in Hillsborough County.

Instead of pushing false narratives from a politically well connected PR person, the Times should be interrogating our county budget. The Times continues to refuse to ask our county commissioners tough questions about our budget or hold them accountable. They would better serve their readers if they stopped regurgitating talking points from an unelected bureaucrat, County Administrator Mike Merrill.

The Times once again goes to the losers to start creating a new narrative while intentionally avoiding the winners who can shatter that narrative. Remember Leytham was told during the Go Hillsborough campaign to mute NoTaxForTracks….(The reality today is "they" can't.)

The public is well aware of the politically well connected Leytham's very cozy relationship with the Times, Commissioner Hagan and Mayor Buckhorn, all who support a sales tax hike. Leytham serves as an information traffic cop between the media and numerous political elites and special interests.

So hold onto your wallets because Leytham, our highly paid local busybody Gladys Kravitz, wants to put another sales tax hike boondoggle on the 2018 ballot.
Since busybody Leytham has been on the losing side of every sales tax hike initiative in Tampa Bay, why does her opinion matter?

Perhaps busybody Leytham wants to jump start a PR campaign for 2018 now so the Times, who wants a sales tax hike, obliges with this article.

Maybe busybody Leytham, who was paid hundreds of thousands of taxpayer dollars leading the failed crony Go Hillsborough campaign, is looking for another lucrative PR contract another campaign could land her.

But….Busybody Leytham is the epitome of the crony political insider this election clearly rejected.

And the Times appears to not get it.

The Inaugural Voyage of the Tampa Bay Ferry 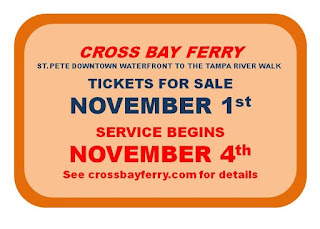 The Cross Bay Ferry not to be confused with the Tampa Bay Ferry and Water Taxi that operates out of John's Pass on Treasure Island, made its inaugural voyage across Tampa bay Tuesday with no regular members of the public just the political elite and their high-roller friends.

You can get the Ferry details in the Tampa Bay Times Caitlin Johnson, Times Staff Writer; New NewTampa Bay ferry to make its maiden voyage on Tuesday and  in Kriseman's 'dream' comes to life as Cross Bay Ferry makes first trip from St. Petersburg to Tampa (w/video).

The Cross Bay Ferry is a joint effort with Pinellas County, Hillsborough County, The City of Tampa and the City of St. Petersburg all chipping in to fund the start up.

It is a great idea to look at this type of alternate transportation.

A pilot project of this nature can define many issues. Principal among them is the last mile issue, which always comes up in point to point public transit. That question simply is how do I get to and back from my actual destination?

Hopefully, this pilot project will give some insight into how that problem is solved.

The general thinking at the moment is initially the ferry will be a round trip tourist attraction that could possibly morph into a commuter option.

The round trip price is $20 per head and by the time, you add parking at your departure site and ground transportation at your arrival site the whole trip could get a bit expensive for daily commuters.

It is an interesting idea, probably a waste of taxpayer money, but the thought of Rick Kriseman doing a Leonardo DiCaprio (Titanic) moment in the bow of the Ferry, while directing the captain to dodge the flotsam and jetsam his City dumped into the bay almost makes it a worthwhile investment.