Read more »
Posted by Sharon Calvert at 9:51 AM No comments:

Pinellas Suncoast Transit Agency (PSTA) is headed towards insolvency. PSTA's operating expenses keep increasing, their ridership and farebox recovery continue declining and PSTA is using their Reserves to keep operating.
Instead of addressing their declining financial position, PSTA is pursuing a proposed $45 million Central Avenue Bus Rapid Transit (CA BRT) service. PSTA submitted a grant to the Federal Transit Administration (FTA) requesting tens of millions of taxpayer dollars from the FTA and from the Florida Department of Transportation (FDOT) for the CA BRT.

PSTA's financial health is deteriorating. The FTA or FDOT should not be handing transit grant dollars for a costly and unneeded new service to a dishonest transit agency going bankrupt.

Read more »
Posted by Sharon Calvert at 11:14 AM No comments:


St. Petersburg has had more pedestrians killed this year than homicides. This troubling trend is also reflected in national statistics: 2018 saw the highest number of pedestrians and bicyclists killed in the United States since 1990. While encouraging more walkers and bikers is commendable and creates a more sustainable transportation system, their safety is paramount. This is a community issue more than a law enforcement issue, and better safety will require more vigilance by drivers, walkers and bikers alike.

The subheading is "It will take a combination of urban planning, enforcement and driver awareness to reverse the trend."

Is that really the full story? 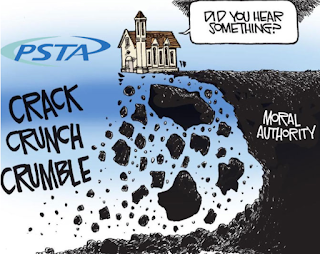 Read more »
Posted by Sharon Calvert at 8:29 AM No comments:

Hagan Only Tip of Iceberg in FBI Probe?

Those being investigated include private citizens as well as other public officials, according to our source in Tallahassee. No specific names were mentioned but could very well include Tampa Mayor Jane Castor, former Mayor Bob Buckhorn, County Administrator Mike Merrill, Water Street Tampa developer Jeff Vinik, and Ybor City land magnate Darryl Shaw.

All promoted and/or had a significant economic interest in a countywide light rail transit referendum and relocation of a ballpark for the Tampa Bay Rays from St. Petersburg to Ybor City. Constitutionality of the referendum is tied up in the Florida Supreme Court where it is expected to be struck down.

Read more »
Posted by Sharon Calvert at 8:08 AM No comments:

Will Scooters Crash the Tampa Streetcar?

We stumbled upon some interesting data on Facebook recently that raises some questions in our mind about the viability of transit compared scooters.

Read more »
Posted by Sharon Calvert at 5:38 PM No comments:

The continuing saga of the Tampa Bay Times’ ethics "challenges" inveigled its way into a St. Petersburg City Council race when the newspaper jettisoned its equal-time rule to protect the relationship it has with a local political operative.

That operative, Barry Edwards, is a member of the Poynter Institute of Media Studies Foundation, which owns the Times, still the largest newspaper in Florida. Edwards’ pervasive high-profile presence in political campaigns -- none of which the Times ever opposes -- violates the journalistic ethics its editors have always professed and the Poynter has taught religiously for decades.